Top Posts
Dershowitz tells Trump what the only path to victory is
Scientists Have Proven that God is Protecting Israel
Candace Owens asks the questions that Americans refuse to answer
CNN lies about ‘Million Maga March’ on their front page...
The UAE gave the greatest response to every BDS activist
IDF releases rare footage of strikes on Syrian, Iranian targets
Canada snubs Israel at the UN in the most shameful...
Caroline Glick: The approaching storm in US-Israel relations
The reason Democrats are trying to abolish the Electoral College
Christian leader answers the most heated question of our time
Gaza Terrorists Shoot Missile At Israeli City, While Abbas Straddles...
Dominion Voting Systems “Lawyers Up” and Cancels Public Hearing In...
De Niro calls Trump a “mob family,” says he will...
CHECK: President Trump Already Prepared For Election Fraud Two Years...
Israel Increases Pressure On Iran With Weeks To Go Before...
Category:

Anti-Semitism is as old as humanity.  It has many manifestations and many versions.  It lurks in the background of almost all cultures, but only bears it’s ugly head from time to time.

Is it a growing phenomenon?

Some will argue that in today’s day and age, nothing could befall the Jewish people that is akin to the Holocaust.  Is the world actually improving somewhat on this matter?  Has the shock of the Holocaust horrors perhaps brought a heightened sensitivity to nations of the world?

It is hard to know, but the latest reports  of statistics are not auspicious.  Back in 2017, the ADL reported that anti-semitism in the United States in 2016 surged by more than one-third.  Moreover, since then, it seems to just be growing.

There will always be those who claim that Jews overreact at the slightest incident.  But, history proves otherwise.  Over-sensitivity to anti-Jewish incidents has good reason.  The world has always been and continues to be a dangerous place.

In reference to anti-semitism, George Will commented this way back in April, 2018: “Nothing — nothing — is unthinkable, and political institutions by themselves provide no permanent safety from barbarism, which permanently lurks beneath civilization’s thin, brittle crust.”

Stanford University better stop this student from becoming an RA. There should be no tolerance for this blatant antisemitism on campus.

Stanford University student, Hamzeh D. is set to be an RA this Fall.  He posted on his public Facebook page that he will “physically fight Zionists on campus next year.”  The job of Residential Assistants on campus is to help students adjust to student life. How will students who live under Hamzeh’s care adjust when he invalidates their beliefs and threatens their safety?

The blatant antisemitism that is growing on college campuses, especially on California campuses, must be stopped. Here are 2 simple steps you can take in order to ensure that Hamzeh does not keep his RA position.
—
1. *Send an E-mail* to Stanford’s Vice Provost for Student Affairs (Susie Brubaker-Cole)! Click here to see Email >> https://mailchi.mp/act-il/keep-stanford-safe

2. *Sign this petition* that calls on Stanford administration to remove Hamzeh from his RA position and ensure the security of all students >> https://chn.ge/2JPHtS4
#Safety4Stanford 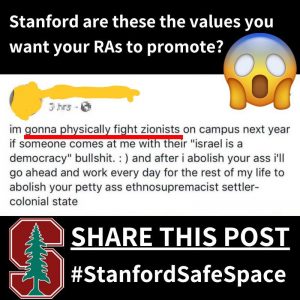