Linda Sarsour has spread lie after lie. This video breaks down the truth about the so-called “Palestinians” in a way that even Sarsour should understand!

The “Palestinians” Were Jews!

Guess what? It was not until the 1960s that the term “Palestinians” referred to the Arabs. Before that, it referred to the Jewish people. The Romans tried to erase Jewish history, and they renamed the area of Judea “Syria Palaestina.” Jews in that area were known as “Palestinians” once the British named the area the Mandate of Palestine. Have you ever heard of The Palestine Post? That was a Jewish Israeli newspaper that later became The Jerusalem Post. And what about the Palestine Symphony Orchestra? Also Jewish. That later became The Israel Philharmonic Orchestra.

It was only in 1964 when the PLO (Palestine Liberation Organization) was created that the Arabs renamed themselves Palestinian Arabs as oppose to the previous name that most took being the Syrian Arabs.

Linda Sarsour recently tweeted a tweet claiming that Jesus was a “Palestinian.” Well, that is a complete lie. He was a Jew who lived in the kingdom of Judea.

This video proves all of Linda Sarsour’s claims wrong (as well as the rest of the anti-Israel world). How can so many believe the lies when the truth is so obvious? 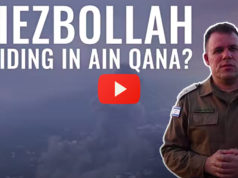 IDF exposes the shocking truth about recent explosions in Lebanon