Top Posts
BBC Gets a Major Slap in the Face from an...
WATCH: IDF Eliminates Terrorist In Shchem
Archie Bunker Sits Down For Shabbat
This is One of the Most Shocking Things in American...
Conflict With Gaza Is About To Explode Again
Russia and Iran Join Forces Against Israel
The Video about Israel that Proves CNN Wrong
This is disturbing: Jews Being Falsely Blamed for Biden’s Persecution...
Last Hours of Netzer Hazani, Gush Katif, Gaza
A Simple Piece of Jewish Wisdom that Everyone Needs to...
FBI Raids Donald Trump’s House, Is America On The Brink?
Hebron: The Aftermath of the 1929 Massacre
The Hit Jewish Song of the Year has Finally Arrived
Freedom of access to Arabs is not worth a Jewish...
China Is Coming To Syria – Threatening Israel

This shocking new video exposes the horrific education US and international funding supports in Gaza. In UNRWA schools, They teach children hate.  US taxpayer money funds the education towards terror and violence to destroy Israel.

US Money Used to Educate Terror

The United States is the biggest donor to the UN refugee organization called UNRWA.  They donate $400 million a year to the UNRWA. Other countries fund the remaining $1.2 billion budget.

Instead of helping stateless people get on with their lives, the UNRWA does the exact opposite.  They indoctrinate them to believe that they have a right to return to villages they ran away from in the 1948 war with Israel.

UNRWA school principal in Gaza: “It is our divine mission that we will return because this is our belief.”

Student at UNRWA school: “We demand the right of return because this is our land and we will not give in”

These schools have schoolbooks that teach the “right of return” by force of arms!

This is educating children to use violence and terror against Israel, all with US and international funding! 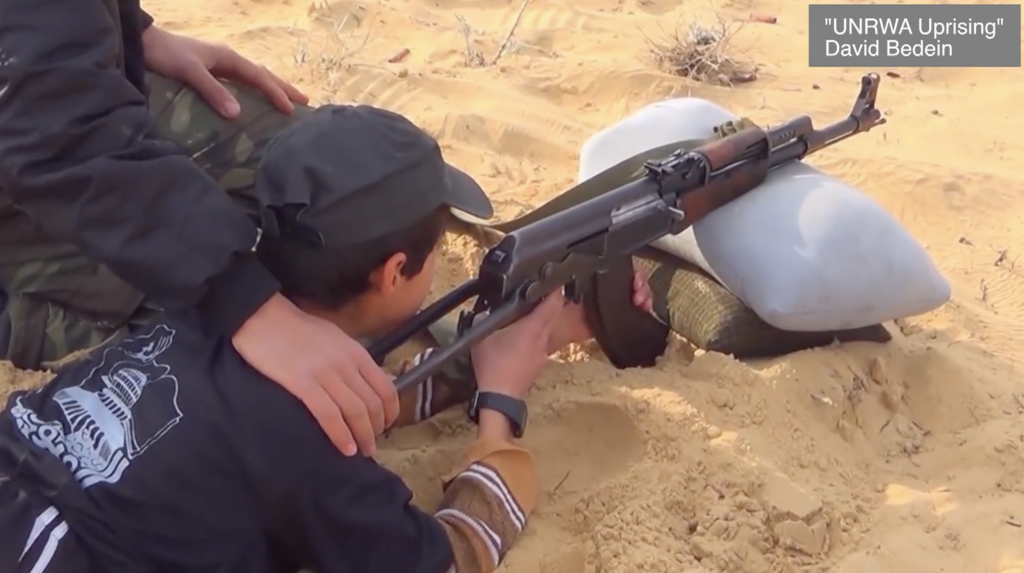 These school principals and teachers have been encouraging the students to participate in the violent Gaza border marches trying to infiltrate Israel and kill Jews.

Is that what US and international aid should be funding?

UNRWA must reject its schoolbooks of war. It just remove terrorists from its payroll. Stop terror cells in schools. And reject educating about the “right of return” by force of arms.

The world should support actually helping these 5 million people leave the refugee camps and get on with their lives.

The media likes to ignore how these “refugees” came to be. In 1948, the Arab world launched a war to destroy Israel and murder all the Jews. The Arab leaders told the “palestinian” Arabs to leave their homes temporarily for two weeks, so not to get hurt by their offensive against the Jews. We won the war and the Arabs lost.

These “palestinian” Arabs then became refugees. In a war that they lost! They wanted to kill us, they failed, they ran away from their homes and for 70 years they cry to the world that they have a “right to return”.

In no war does the loser have a “right to return” to homes they lost. Especially since they wanted to kill all the Jews and destroy Israel. Yet UNRWA educates these children about their “right to return”.

All other refugees in the world are repatriated by the United Nations organization called UNHCR. The UNHCR repatriates tens of millions of refugees from all over the world. Arabs who lost their homes in wars against Israel are the only population of refugees that have their own independent UN organization. And they are NOT repatriated, rather UNRWA keeps them in a state of “refugee perpetuity”! Once a refugee in the wars against the Jews, always a refugee until they “return” to their villages they lost in a war to kill the Jews and destroy Israel.

This state of affairs with UNRWA shows a blatant double standard vis a vis the way the world treats Israel versus all other conflicts in the world.

Passing down the Refugee Status for Generations

The other horrendous fact ignored by the world is that according to the UNHCR, a refugee is one who lost his home in a conflict. That person is then repatriated in another country. His/her children and grandchildren are never considered refugees. However, according to UNRWA, the refugee status is handed down generation to generation.

Newly leaked reports count the actual refugee number of “palestinian” Arabs still alive today at around 20,000. Yet, all media throw around numbers of 5 million, 10 million, 20 million “palestinian” Arab refugees who all deserve the right of return, because it counts all the offspring.

Again, a total double standard of defining a “refugee”. One definition for all refugees from all over the world and a second definition for those who are refugees in the conflict against Israel.

Refugees from Syria and Iraq

In the past couple of years, the conflict in Syria and Iraq alone produced millions of refugees.  Those refugees find refuge in countries all over the world, including the USA. Has anyone ever mentioned their “right to return?”  Or keeping them in refugee camps instead of repatriating them?  No, the world only does that for refugees from the conflict with Israel.

Conflict With Gaza Is About To Explode Again

My Birthday the Fast Day – Why are...

A Simple Piece of Jewish Wisdom that Everyone...

This is One of the Most Shocking Things...

Hebron: The Aftermath of the 1929 Massacre