Top Posts
Israel Readies Swift Response To Terror
Seven Murdered In Deadly Jerusalem Terror Attack
Why Did Bibi Meet Jordan’s King?
The Moments the Nazis Planned the Most Vicious Crime in...
Is WW3 Upon Us?
Ben Shapiro Exposes Why Dr. Fauci Really Retired Early
Watch What Happened at This Holocaust Remembrance Day Ceremony
Trump Unleashes Plan to Stop China from Taking Over America
Watch the Spelling Bee Judges Stumble Over the Definition Of...
Russia Warns Israel Over Iran
Biden, NATO and World War With Russia
The Ukraine war starts to undermine Israeli security
U.S. and Israel Launch Major Military Drill – a Strike...
Musk Goes To War Against The World Economic Forum
A Famous Jewish Philosopher Gave This Powerful Message About the...

Welcome to the new congresswoman Rashid Tlaib.  She openly supports the US Muslim Brotherhood organization CAIR that aims to destroy the USA from within. Tlaib did not don a US flag after she won a seat in the House of Representatives. Instead, she chose to celebrate her win as a representative of the American people in a different way.  She wore the flag of a non-country called “palestine.”  Interestingly enough, she received no backlash about “dual loyalty” for a blatant act of loyalty to a different entity besides the USA. Here she is at a recent Muslim Brotherhood event. She gloats at how people voted for her for standing up for values, progressive values.  All of these things are values that the Muslim Brotherhood vehemently opposes. She then calls CAIR a civil rights organization.  That’s another big lie. As soon as the Muslim Brotherhood gains enough power, it will impose Sharia law and take away rights from naive freedom-loving Americans.

CAIR is established by U.S. Muslim Brotherhood’s “Palestine Committee” which is Hamas in America

“My passion for justice is rooted in my beautiful Palestine which is yet to be freed. She (Palestine) will be with me as a Congresswoman” pic.twitter.com/44Ya6ywejM

CAIR is the Council of American Islamic Relations.  It is an organization that is associated with the global Sunni Muslim Brotherhood organization. CAIR was named as an unindicted co-conspirator in the Holy Land Foundation (HLF) trial. It was a Hamas financing case that would result in an FBI decision to cease its working relationship with CAIR. The Department of Homeland Security also will not work with CAIR.

CAIR presents itself as an advocate for Muslims’ civil rights and the spokesman for American Muslims. However, CAIR’s long-serving chairman, Omar Ahmad, reportedly told a crowd of California Muslims back in July 1998 the true purpose of the activities of CAIR. “Islam isn’t in America to be equal to any other faith, but to become dominant. The Koran … should be the highest authority in America, and Islam the only accepted religion on earth.”

The Muslim Brotherhood and CAIR are very dangerous. They aspire to turn the USA into a Muslim country. Their plan is written in the documentation uncovered as part of the Holy Land Foundation Trial. This is a real, authentic fear! Don’t let the screams of “Islamophobia” stop you. We must all call out the dangers that Islam, CAIR and the Muslim Brotherhood pose to the USA and the freedom loving world.

The objective of the Muslim Brotherhood in America per the Explanatory Memorandum is “a kind of grand jihad to eliminate and destroy Western Civilization from within. To “sabotage” its miserable house by their hands and hands of the believers so that God’s religion is made victorious over all other religions. Not one media outlet at the time shared this information.

The fact that a Congresswoman speaks at a Muslim Brotherhood-affiliated dinner should concern all freedom loving Americans.

Rashida Tlaib is one of the first two Muslim women that got elected to US Congress. Before the election, they misled voters and claimed they held moderate views on Israel. Now they suddenly reversed their positions and say they support sanctions on Israel.

This video is from a pro-jihad rally that occurred during Operation Protective Edge in 2014. This war was precipitated when Hamas kidnapped and murdered three young Israeli teenagers. Israel was also defending itself against Hamas rockets that were slamming southern Israel. Hamas was firing rockets from the civilian population of Gaza into the civilian population of Israel. A double war crime.

When Tlaib won her Congressional seat she did not wear an American flag, she wore the flag of a non-country called “palestine”. Interestingly enough, no politicians or media attacked her for “dual loyalty”, like they do all Jewish Americans. Food for thought. 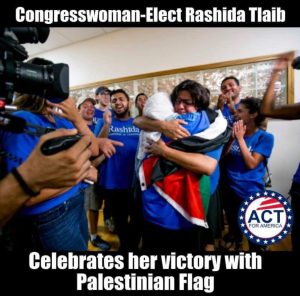 Sick! Because of our easy citizenship path and massive immigration we have another govt rep who will spend her time fighting for her home country instead of Americans!! Embroil us in years of interference, and turmoil with allies. Sick of the Democrats who use us and our tax $!

YOU WILL HAVE TO WAIT WHEN THERE IS A REAL PLACE CALLED PALSTINE!

Why Did Bibi Meet Jordan’s King?

Musk Goes To War Against The World Economic...

Russia and China Prepared To Take Down The...

The unhinged reaction to the new Israeli government

The IDF Story that Highlights Why Many Israelis...

The Shocking WWII Story That Nobody Knows About