Top Posts
An Illegal Immigrant Exposed VP Harris’s Giant Lie to Americans
Who Sabotaged Europe’s Gas Supply?
The real reason for the war against Israel and the...
Is a Revolution Coming to Iran?
IDF Carries Out Daytime Raid on Arab terrorists In Jenin
Members of the Israel Defense Forces Sing One of the...
Putin’s Threat to the West is a Big Bluff
The Earthquake that Uncovered Hidden Findings on the Temple Mount
International law and the State of Israel
Netanyahu Stars in Beautiful Video Prayer for IDF Soldiers
Hamas leaders in Moscow: We are entitled ‘to resist by...
When This Happened at the White House, Americans Were Terrified
Palestinian Arabs Are Still Actively Fighting The 1947-9 War Against...
Watch this College Student Take Down CNN in Less Than...
Watch This Powerful Video of When the World Loved the...

Meet AJ Bernard, a Methodist Pastor from Ohio. AJ and I are social media friends on Twitter and Facebook. AJ contacted me to meet up since he was coming to visit Israel. Of course I would! I love meeting virtual friends and making them real! The video is a meeting of the minds between an Israeli Jew and a Methodist Pastor in Jerusalem.

Meeting and speaking to AJ was a true pleasure. First of all, I always try to be conscious not to talk “Jewish” when I converse with non-Jews. I want to have a conversation where we are both as comfortable as possible, and that includes using English phrases for Jewish concepts. So, when talking to AJ about the upcoming Jewish holiday of Passover, I specifically said ‘Passover’ instead of the Hebrew term “Pesach”. Surprisingly, AJ responded, “oh, you mean Pesach?” Totally catching me off guard. Here is a man who is a faithful man, a true follower of Christianity, a Methodist Pastor, and he is totally comfortable using Jewish terminology.

Understanding Judaism to Be a Better Christian

That was not AJ’s only surprise for me. AJ proceeds to tell me that when he returns to his congregation in Ohio he will be leading a Pesach seder, the traditional holiday meal Jews have on Pesach. When I asked him why, AJ’s response was eye-opening to me. He told me that he believes that in order for Christians to be good Christians they must understand their Jewish roots. Obviously, when he leads a Pesach seder he will not be doing it according to Jewish law, but in a way for his Christian congregants to better understand the Bible, and the history of the Jewish people, so that they can be better Christians.

But there was more. AJ saved one more surprise for me. To him, it was something so natural. He had no clue how surprised I would be to hear what he was about to tell me. Upon asking him what his most touching moment was on his trip to Israel, he told me visiting the Temple Mount and the Western Wall of the Temple Mount.

Now for the surprising part. AJ told me that upon visiting the Western Wall, he sat down and took out his Bible to then read the passage from Jeremiah chapter 52 and recite the story of the first Temple being destroyed. Upon which he cried. Sitting there at the place where both Temples once stood, he read the account in his Bible and cried.

This surprised me for two reasons. First of all, Jews don’t even do that! It is our Temple, and it is something we are supposed to be sad about.  But I don’t know of many Jews who open up the Bible to read the story of the Temple’s destruction when they visit the Western Wall. Second of all, I was surprised that he did it, while he is not even a Jew. Yet once again AJ explained to me the importance he places on connecting and understanding Jewish history because it is the history of Jesus and of the Christian faith. 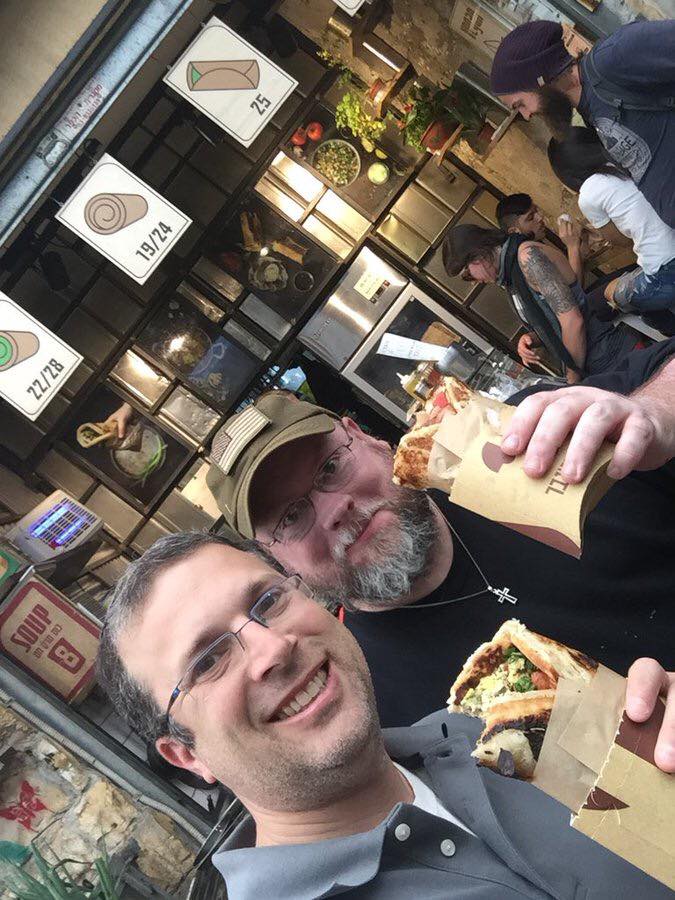 Finally, it was a true meeting of the minds.  Both of us understand the new reality with the growing influence of Islam in the West. Unfortunately, we both recognize that many Jews and Christians today prefer to excuse the actions of the Shariah, jihadi Muslims because they were “oppressed”. However, AJ and I understand that those shariah, jihadi Muslims are out to conquer us all, Jews and non-Jews. The time has come for Jews and Christians to come together and protect ourselves. The battle of civilizations is still in its infancy. In order to save ourselves, we must join forces. Whatever differences we have, we must put aside and respect one another. The future of our children and grandchildren depend upon us joining forces to stop the one threat that threatens us all.

Ukrainian refugees have a Passover Seder to look...

The Shocking Connection Between the Purim Holiday and...

The Undeniable Proof that the Jewish People are...

The Ultimate Video to Prepare for the Day...

The Passover parody that you’ll be showing to...

Ted Belman
International law and the State of Israel