Top Posts
Lee Zeldin ROCKED Ilhan Omar’s “honesty” with the real truth
The Film that will Change the Way the World Views...
War With China Is Coming…Very Soon
Trump Claims “Bodies Dumped Outside Wuhan Lab”
AOC Introduces Resolution to Aid Hamas in Killing Israeli Citizens
“Squad” Freezes Funding For Iron Dome
“Free Palestine” Protesters call for Jewish Students to be Kicked...
Is The Taliban’s Control Beginning To Slip?
Arab Terrorists Burn Beit Knesset in Southern Judea
A drone flew over Masada and captured a breathtaking view
What it means to call the Land of Israel home
The President’s Open Borders Policy is Putting Americans in Grave...
9-Year-Old Girl Gives a Piece of Her Mind to School...
Israeli Startup Develops Foldable Electric Car that Will Change the...
Black Lives Matter Co-Founder Calls for the Elimination of Israel

Israeli police forces today expelled 15 families from their homes in the Jewish neighborhood of Netiv Haavot. These homes will be destroyed. This story reflects the success of Israel’s liberal elite in trying to destroy the Jewish presence in Judea and Samaria. Thousands came out to protest this unjust expulsion.

So too, Israel has a strata of liberal elite who are ashamed of their Jewish heritage.  They in turn do everything in their power to weaken Israel’s Jewish character. Part of that battle includes expelling Jews from living in our ancient homeland, the cities of the Bible, in Judea and Samaria.

The families agreed to “leave” their homes peacefully, without violence. Thousands of Jews came out in support to protest this injustice. The following video shows the extent of the violence that took place, some pushing and shoving between the protesters and the police.

The expulsion took all day, with the police removing one person at a time from the packed houses.

The Den-Heijer family being expelled from their home of 15+ years.

Watch the following video and hear David Den-Heijer explain the injustice of the destruction of his home. See with your own eyes what is about to be destroyed and why. This is clearly judicial injustice, tyranny and discrimination against Jews.

“This is what a peaceful demonstration looks like. There are no tires burning. No knives or weapons. There are no fire kites setting fields ablaze. Because a person who loves their land does not burn their land.”

“There are signs. Signs crying out the injustice of this meaningless destruction. Signs with prayers and hopes of returning. There are countless blue and white flags of all sizes blowing from the rooftops. There is singing: songs of mourning, songs of faith. And there are tears; encouraging smiles; people embracing.”

What makes a house a home

“Fifteen homes. What makes a house a home? It’s the paintings on the wall. It’s the light fixtures. The tiles. You run around stores picking, then installing, hanging. Piece by piece. Until it is a reflection of who you are and what your family is about.

And then, day by day, you fill it with moments which become the memories that define your “us.”  The family meals with stories, jokes, arguments.  The birthday celebrations, the holidays, the talks, the learning, the playing, the fighting…These are things that cannot be torn down. You take them with you. But it hurts when you slowly see a home turned into just a house.”

“From one home there was singing that drew me in. A man played the violin and accompanying voices filled the room. For a moment, I saw an image of Fiddler on the Roof and the Jews leaving their homes. Only we aren’t in Anatevka. We are in Israel. And this neighborhood is called Netiv Ha’Avot – Path of the Patriarchs.”

“So we will rebuild. Homes.”

The picture below shows a red line crossing through 15 of the homes. That red line represents questionable land which the legal status is unknown. The Supreme Court could have allowed the State to complete a survey process to clarify the legal status of that red line.  Instead, the Court ordered the destruction of all 15 homes.

How did this situation come about? The liberal Israeli organization “Peace Now” found out that this strip of land was questionable.  Their next step – search out for Arabs to claim the land. They literally went door to door looking for an Arab to “claim” it.

No proof of Arab ownership 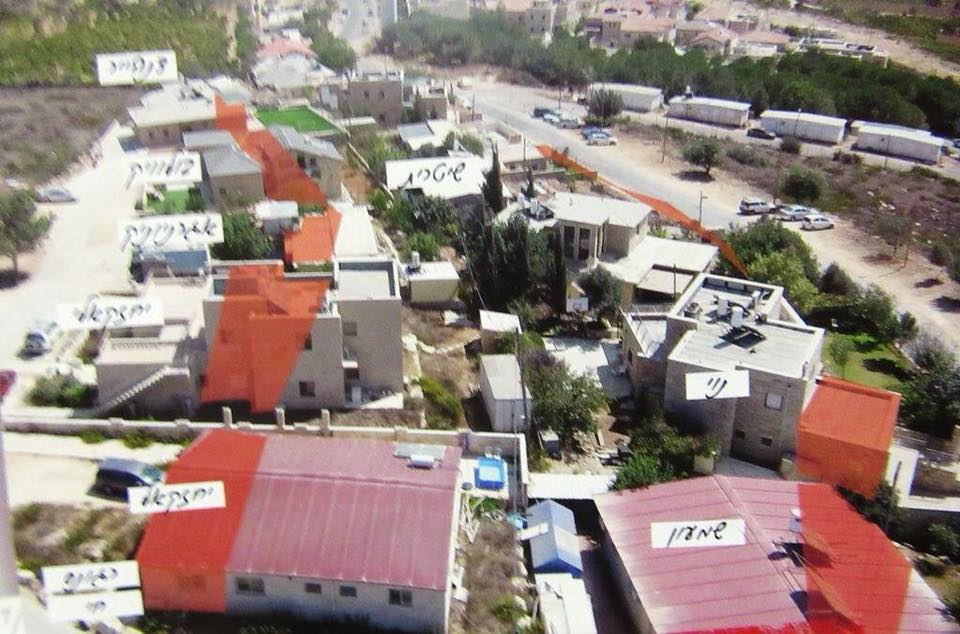 The media has been told that this is a case of Jews stealing Arab land, but that is a big lie.

Rather than expediting the regulation process that would have declared the land owner-less, the court prefers to demolish and destroy. What a shame that the High Court of Justice has abandoned justice.

Former Supreme Court Justice Tzvi Tal arrived a short time ago to support the residents of Nativ Ha’avot, who were expelled today. He himself strongly criticized the High Court of Justice for ordering the demolition of the houses.

It is so very sad that these families will be homeless. Judicial injustice is never ok. It is even more infuriating because of the double standard against Jews in our own country. While Arabs build thousands of illegal buildings that the Supreme Court ignores, this same liberal court is quick to destroy Jewish homes in Judea and Samaria.

We have much to be proud of in our country. But, we must remove the liberal left-wing agenda-driven obstacles from the justice system.

They Destroy and We Build More

This is a sad day. However, even though the liberal elite succeeded in destroying these 15 homes, 300 new homes will be built in this settlement.

While the liberal elite are trying to destroy our Jewish presence in Judea and Samaria, we are coming out of this stronger than before.

Hear land of Israel leader Nadia Matar discuss this in the following video.

The craziest aspect of this tragedy is that after these families are expelled from their homes, they will then rebuild their homes on this exact same spot in a few years. Why? Because the courts first want the State to finish the survey of the land.  Only after the survey is completed, and the land  becomes officially ownerless, will the Courts then allow the families to rebuild their homes here.

A family hanging up a sign saying “On this land a home is being destroyed to be rebuilt, with G-d’s help, within two years.”

As another eyewitness expressed on a facebook post today:
A sad, sad day… So frustrating that there’s nothing we can do but stand and watch as we literally tear our own houses down. And yet hardly anyone knows about this.

At least it shouldn’t be for nothing. Tell people what happened here. Let people know that we are turning people’s lives inside out. There should be no doubt and no question about our ownership, our homes and where we live.

No one is gaining from this evacuation. No one will benefit from the trauma these families are going through. Except, perhaps, for those who filed the suit in the first place. A suit whose goal, I’m sad to say, can only be malicious for there are no winners here.

Summary of a Painful Day

Fifteen families in Judea & Samaria were expelled from their homes today. However, in the near future, 350 new homes will be built right there!!!

The Israeli liberal elite, embarrassed by their Jewish heritage and traditions, tries to destroy our presence in Judea & Samaria. But they are failing, and they will continue to fail!

The Jewish people have an eternal connection to this land. Our living here is the KEY to a future of living peacefully with those Arab Muslims who choose to live peacefully with us.

Today is just another little setback in our long journey of returning, as a people to our homeland. Our presence here is not just for our benefit, but for the benefit of all of humanity!

The Jewish people are home. It’s not about the land, it’s about a better world for us all. And it is linked with reconnecting with our Jewish heritage and living in our homeland!!! AM YISRAEL CHAI!!!