Top Posts
Ex-KGB Agent Reveals Putin’s True Plans In Attacking Ukraine
Russia and Saudi Arabia Cut Oil Output, Threatening America
Why The Jewish Star Is So Important To Us
Watch When Prime Minister Bennett Called Out CNN for An...
Biden’s Latest Blunder Left Even the Press Secretary Speechless
Bill Maher Nails It On LGBT Craziness (Hilarious)
This Jerusalem Tour is One the Palestinian Arabs Don’t Want...
Watch One of the Most Beautiful Things about the Jewish...
Putin Prepares His Nuclear Arsenal As NATO Pushes Forward
Rare footage of the Secret Archaeology on the Temple Mount
The Principle of Self-Determination in International Law
SS Carved into wall on Temple Mount
President Biden Gave Palestinian Arabs His Blessing to Keep Killing...
ISIS cell in Nazareth plotted to attack a Muslim school...
Members of the Israel Defense Forces Sing One of the...

Thousands Riot in Chemnitz, Germany After Another Murder by Migrants

Several people were injured as thousands of Chemnitz locals protested for the second night of anti-migrant protests, after the fatal stabbing of a 35-year-old man by migrants from Iraq and Syria on Sunday.

Germans are sick and tired of the government ignoring all the violence of the Muslim migrants that have been welcomed into Germany the past few years.

The stabbing of the 35 year old man on Sunday, by a migrant from Syria and one from Iraq has sparked the massive protest going on the past few days.

An estimated 5,000 protesters took to the streets to protest. Another 1,000 came out as a counter protest in defense of the migrants. The police had to enter the fray and bring order to the streets.

As if to prove the point of the protestors, instead of the government taking a strong stand against the violence and the murder, by the migrants, the authoritites placed the focus on the “right-wing” protestors.

One government minister warned that the “right-wing anti-immigration” vigilante groups are creating “civil war like conditions” in Germany.

Burkhard Lischka, an opposition SPD politician in the interior ministry, told one German paper that “there is a small right-wing mob in our country that will take every opportunity to enact its violent fantasies of civil war-like conditions on our streets.”

Even the retoric of German Prime Minister Angela Merkel follows this same direction, warning against what she called “vigilante justice”.

However, most of the people protesting are not doing so because they are “right-wing vigilantes” but, as Markus Frohnmaier, from the anti-immigration AfD party, tweeted because “if the state is no longer able to protect citizens then people take to the streets and protect themselves. It’s as simple as that!”.

While it is very probable that some of the protestors were right-wing, neo-nazi supporters, the mainstream media, in Germany and abroad, adds to the distrust of the citizens by labeling every single protestor “right-wing”, totally discrediting all the regular citizens who are disgusted by being abandoned by the government and police. 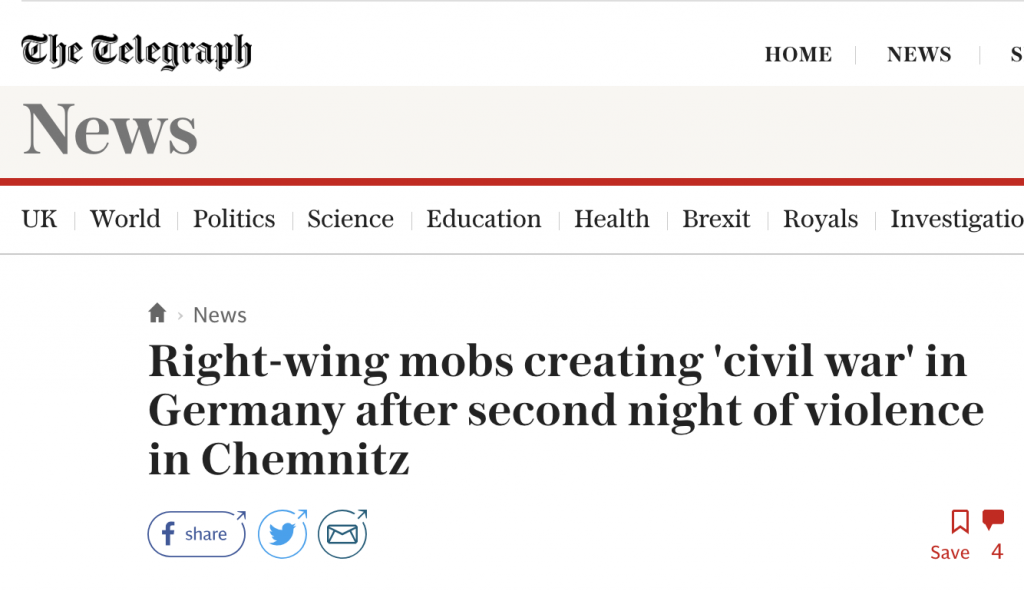 I can confirm this as we live in Germany and many of the locals are sick and tired of the government`s handling of the immigration. Nothing to do with racism.

Far right? Or ordinary Germans sick and tired of being attacked by Merkels migrants? #Chemnitz pic.twitter.com/PHU0kV9Kvv

A message about Israel from a Six Day War hero

How the New Israel Fund is brainwashing the religious communities

Ted Belman
The Principle of Self-Determination in International Law