Top Posts
The Extremist Who is Really Behind Ben and Jerry’s Boycotting...
Catastrophic Floods around the World
Exposed footage: Louis Farrakhan wished death upon Americans
Will Iran’s Latest Protests Destroy The Regime?
Are Israel and Lebanon Headed Toward a Full-Out War?
The 11 Second Video That Says Everything About BDS
Are Biden and Putin Working To Take Down Israel?
The United Nations is Silent as Iran Waves Nuclear Weapons...
Americans Were Warned Years Ago that Communism Would Destroy America
Is Bennett Going To Make Peace With “Palestine?”
Iran Attacks Israeli Operated Ship Off The Coast of Oman
President Joe Biden thinks Black people are too stupid to...
Tucker Carlson exposes all the media’s lies about January 6
Russia and Israel Headed For A Clash
What the White House is Now Doing Puts Every American...

The rich history and contributions of Jews in France, with origins dating back to the Middle Ages, are coming to an unfortunate end. For nearly half of our existence, 1,500 years, the Jewish people have had a presence there. In 2016, then Chairman of the Jewish Agency, Natan Sharansky said in Paris, “There is no future for the Jews in France because of the Arabs, and because of a very anti-Israel position in society, where new antisemitism and ancient antisemitism converge.”

France, for now, is home to the world’s third largest Jewish population, behind Israel and the U.S. The estimated number of Jews there is between 460,000 and 500,000. France is also home to Europe’s largest Muslim population, six to 10 million, and outside of Israel, has the largest number of Jews and Muslims living side by side. While Jews comprise less than 1% of the French population, half of all hate crimes reported in France are committed against Jews. Gravely, research indicates a correlation between antisemitic violence in France to flare-ups in Arab/Israeli tensions.

Sadly, Jews are not safe in France. Consider the relative ease with which the recent French “Yellow Vest” protests over taxes and other economic concerns transitioned by some protesters into a forum to spew antisemitic slurs and rhetoric. The Chabad House on the Champs-Elysées was forced to close its doors. French social media was plagued with antisemitic comments. The first duty of a government is to protect the safety and welfare of its citizens. France has woefully failed to fulfill this fundamental, threshold obligation. This is due, in part, to a notion under French law that people are not categorized by race or religion, but rather only as French citizens. Therefore, the root cause of the rising wave of antisemitism in France has not been adequately addressed. The French government (generally) prefers to ignore the reality and consequence of cultural incongruity, in favor of a fictitious, harmonious, non-existent homogeneous France. To quote the French philosopher Voltaire, “Optimism is the madness of insisting that all is well when we are miserable.”

In 1789, with guidance from Thomas Jefferson, France adopted the Declaration of Rights of Man. The preamble begins: “The representatives of the French people, organized as a National Assembly, believing that the ignorance, neglect, or contempt of the rights of man are the sole cause of public calamities . . .” Article II provides that, “The goal of any political association is the conservation of the natural and imprescriptible rights of man. These rights are liberty, property, safety, and resistance against oppression.” There is a public calamity in France, and the safety of Jews in France is tenuous. It is obvious that policymakers in France derive no inspiration or direction from their own philosophers or Declaration of Rights.

I have been to France and my wife and I would like to visit once again. Our obstacle is that I wear a kippah, which would place me in danger. Earlier this year Meyer Habib, a Jewish member of the French National Assembly, cautioned Jews not to wear kippot in the street, for fear that they “might be killed.” And while I could wear a baseball hat (or maybe beret?), I’m just not a baseball hat guy.

For feedback on this issue, I’ve written simple letters to President Macron, Paris Mayor Anne Hidalgo, and French Ambassador to the U.S. Gerard Araud (former Ambassador to Israel 2003 – 2006). The letters ask whether I would be safe walking through Paris and surrounding areas wearing a kippah, and if not, what is being done to rectify the situation. I will share any response received. 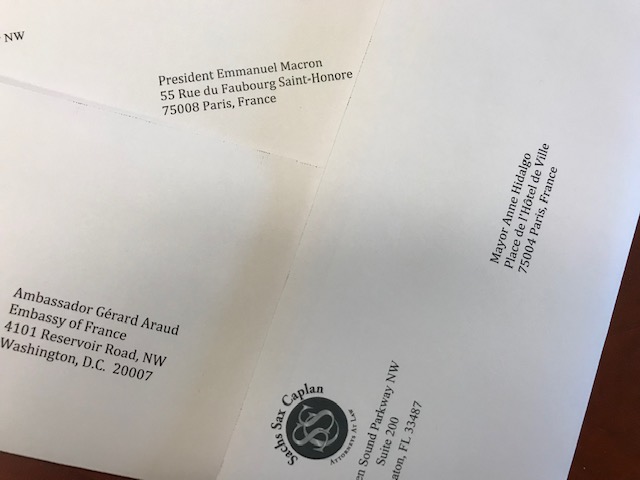 Picture of the letters being sent

As an American, I am disappointed that our oldest ally does not adopt an unequivocal, vocal and active stance on antisemitism. They can enact and enforce laws, take control and be proactive rather than reactive. As a Jew, I am appalled that a country that has been enriched by a Jewish population and Jewish culture for nearly 1,500 years does little to curtail the need for Jews to flee the country.

How will France respond if the day comes that Hillel Neuer of UN Watch poses the question at a UN Human Rights Council session, “France, you had over half a million Jews. Where are your Jews?”

Antisemitism may start against the Jews, but it does not end with the Jews. Once France is sufficiently depleted of its Jewish population, who will be next?

The 11 Second Video That Says Everything About...