Top Posts
Must See Interview Between Bibi and Ben Shapiro
Is The World Turning Against “Palestine”?
Eight false and malicious anti-Israel catchphrases and buzzwords
This is What’s Going to Happen After the FBI Raid...
Trump’s Deal of the Century a.k.a The Jordan Option
Check Out Where the Arch of Titus is Being Displayed
Trump Releases Video that leaves Democrats Terrified of What’s to...
This Muslim is Banned from 20 Countries – Here’s Why
300 Drones Light Up the Sky of Jerusalem in Celebration
Israel Must Bomb Iran’s Nuclear Facilities Before It’s Too Late
Soldier Killed In Friendly Fire Incident
TERROR IN JERUSALEM: Arab Terrorist Shoots 8 People Near the...
Russia and Iran Join Forces Against Israel
The IDF Finds and Neutralizes Hamas Terror Tunnel
an attack against Iran will save lives

Good morning from the capital of Palestine | Jerusalem 🇵🇸💜 pic.twitter.com/k8fpudCLBp

On the one hand, Muslims claim that Jews walking on the Temple Mount is disrespectful, as a screenshot of the following tweet exemplifies 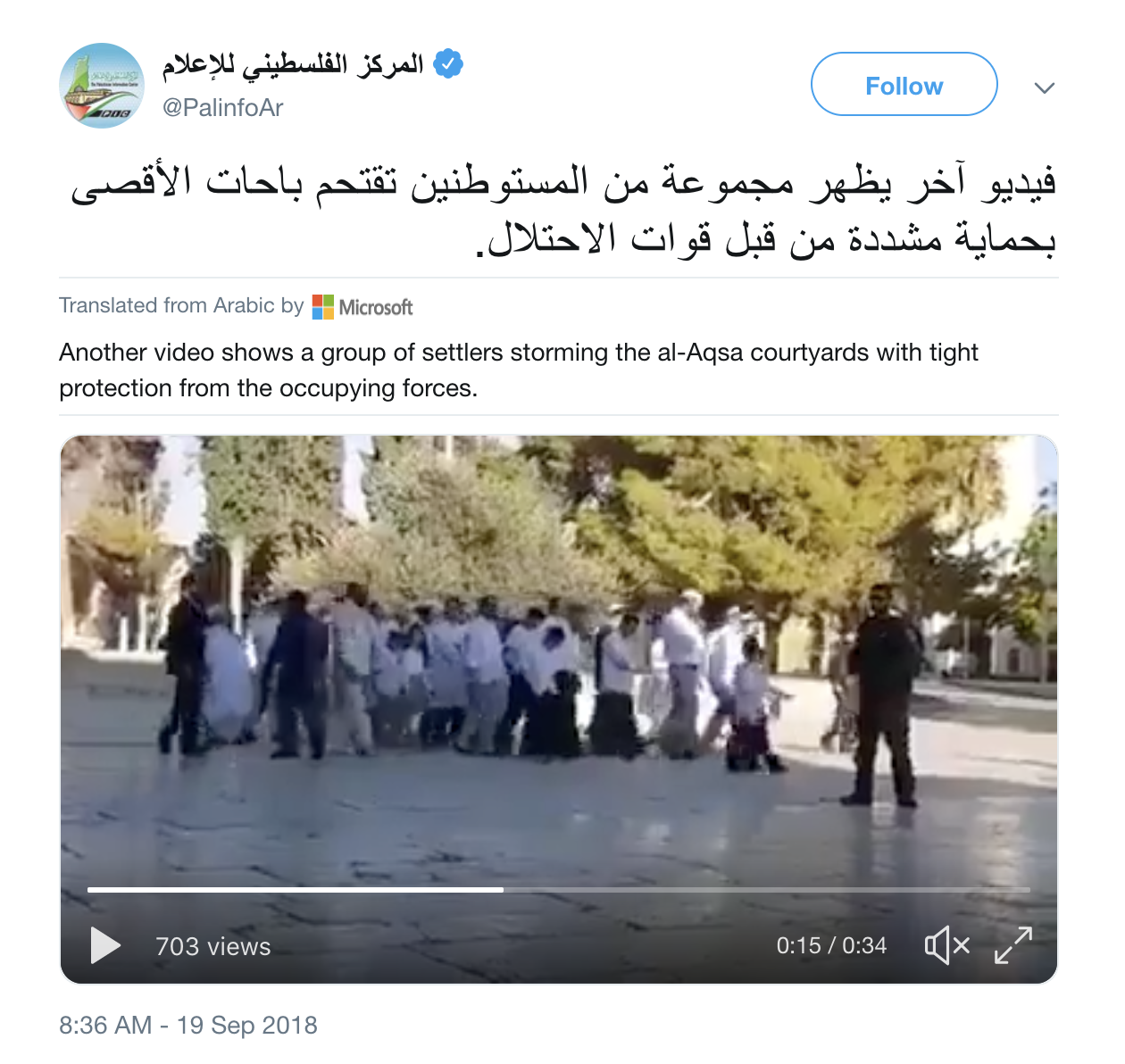 Here is the link for the video tweet of Jews walking peacefully on the Temple Mount yet called “storming” by the Muslims: https://twitter.com/PalinfoAr/status/1042301341710868481

Yet Muslims can have snowball fights, play soccer, picnics, murder policemen and perform extreme sports acts on the Temple Mount, and those do not desecrate their holy site? You think they are allowed to have water fights in their holy sites in Saudi Arabia, Meca and Medina? If you think yes then we can sell you the Brooklyn Bridge. And please find us the youtube videos of those water fights or the other desecrating activities they do on the Temple Mount!

The Truth about the Temple Mount

The truth is simple, the Temple Mount, built on Mount Moriah, is holy to the Jewish people since the time of Abraham 3,000+ years ago when Abraham performed the sacrifice of Isaac on the Mount. Later in the 10th century BCE, around 974 BCE, King Solomon built the first Jewish Temple on the Mount, 1,600 years before Mohammad introduced Islam to the world and 1,700 years before the first Muslim Mosque was built!

Another piece of information is that Jews pray facing the Temple Mount three times a day, regardless of where we are in the world, expressing the deep holiness of this place to us. Muslims pray towards Mecca in Saudi Arabia.

Muslims today claim that the Temple Mount is the third holiest site in Islam, but is it holy to them at all? Would they truly desecrate one of their holy sites?

Mohammad had the dream at around 622 CE. However, the Al-Alqsa Mosque was built on the Temple Mount in 705 CE! So how did Mohammad dream about flying on a horse in the middle of the night to pray at the Al-Aqsa Mosque in Jerusalem? Of course, Islam prefers to ignore the fact that another Muslim tradition believes that the Al-Aqsa Mosque is really in Saudi Arabia, near where Mohammad lived at the time!

Muslims Picnicking on the Temple Mount

So if a Jew steps foot on the Temple Mount, the Islamic Waqf says we defile and disrespect this holy site.

But if Muslims have a mass snowball fight… that’s not disrespectful… that’s cool 🤔 https://t.co/I19n9rT8Rs

Must See Interview Between Bibi and Ben Shapiro

Netanyahu will not apply Sovereignty. The right should...

Watch as Misfired Rocket from Terrorists Lands in...

This is disturbing: Jews Being Falsely Blamed for...

Check Out this Fascinating Discovery in Ancient Shiloh

David Mark
Is The World Turning Against “Palestine”?

Daniel Greenfield
Iran builds its own online ISIS in America

Ted Belman
Trump’s Deal of the Century a.k.a The Jordan Option