Top Posts
Exposed footage: Louis Farrakhan wished death upon Americans
The Extremist Who is Really Behind Ben and Jerry’s Boycotting...
“Palestine” Supporters Target American Jews at Their Own Homes
Americans Were Warned Years Ago that Communism Would Destroy America
Catastrophic Floods around the World
Iran Attacks Israeli Operated Ship Off The Coast of Oman
Will Iran’s Latest Protests Destroy The Regime?
Are Israel and Lebanon Headed Toward a Full-Out War?
The 11 Second Video That Says Everything About BDS
Are Biden and Putin Working To Take Down Israel?
President Joe Biden thinks Black people are too stupid to...
The United Nations is Silent as Iran Waves Nuclear Weapons...
Is Bennett Going To Make Peace With “Palestine?”
Tucker Carlson exposes all the media’s lies about January 6
Russia and Israel Headed For A Clash

The frightening life that children of radical Islam are forced into

This is not easy to watch – and it is only the trailer.  But, it is critical that this be seen by anyone concerned about our future. An entire generation is being raised on the ideals of jihad.

Well, there are extremists all over the world who educate young children today to the exact opposite.  They educate to hate and to dominate. They educate that their are people thousands of miles away from them that they need to eradicate. Jews, non-Muslims and so many others are the enemy. The ideology is not new. However, today, it is not professors in obscure locations around the world or preachers with a small group of followers that are leading the charge.  They are leaders of tens of thousands of people if not hundreds of thousands of people.  They are armed and dangerous.  And most of all, in the name of religion, they aim to dominate the entire free world.

Clarion Project explains that, “At best, these children internalize toxic values and become full of hate. At worst, they become terrorists themselves. Turning kids into terrorists is a horrifying violation of their human rights as defined by the United Nations Convention on the Rights of the Child.

“THE CHILD SHALL BE PROTECTED AGAINST ALL FORMS OF NEGLECT, CRUELTY AND EXPLOITATION.”
Principle 9, UN Declaration on the Rights of the Child 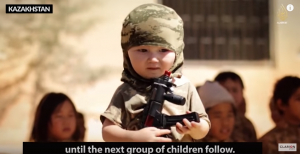 What is there to do?  There is a whole lot to do.  This film is just one of so many things that we need to do ensure a hopeful future for the next generation.

We need to complete the film.  We need to give these children – who are victims – a voice.

Fundamental change must be our goal in these cultures and that takes decades.  But if we start with a major awareness campaign.  Then, that will provoke a conversation across continents, and lead to action that will make the world into a better place for future generations.

Stand up and do your part.

The Song that May Become the Next National...

The Way to Rebuilding the Third Temple Lies...

Black Jewish Rapper Shares it All on Today...

The Answer to Life’s Challenges Lies in this...

A Secular and Religious Singer Join to Sing...

The secret to Jewish survival lies in this...