Pictures have emerged of UK Labour leader Jeremy Corbyn laying a wreath for terrorists who murdered innocent Israelis. Israeli PM Netanyahu then tweeted “The laying of a wreath by Jeremy Corbyn on the graves of the terrorist who perpetrated the Munich massacre and his comparison of Israel to the Nazis deserve unequivocal condemnation from everyone.  Left, right and everything in between”. In response, Corbyn doubled down and denied that he laid the wreath for the terrorists.  Furthermore, he showed his anti-semitic true colors and ignored the massive Gaza terror attacks against Israel.  Instead, he blamed Israel and Netanyahu for the death of children in Gaza.

Israeli PM @Netanyahu‘s claims about my actions and words are false.

What deserves unequivocal condemnation is the killing of over 160 Palestinian protesters in Gaza by Israeli forces since March, including dozens of children.https://t.co/H5nXqi3pnU

A Liar and an Anti-Semite

Corbyn claims that he attended a “peace conference.” Note the pictured of Corbyn with a wreath for the terrorist.  This was NOT a “peace” conference at all. It included a speech by a Hamas terror chief who extols violence against Israel and Jews as “magnificent.” Another speaker compared Israel to ISIS. Even though pictures show him holding the wreath before it was placed, Corbyn explained that he “was present when it was laid, but I don’t think I was actually involved in it.” 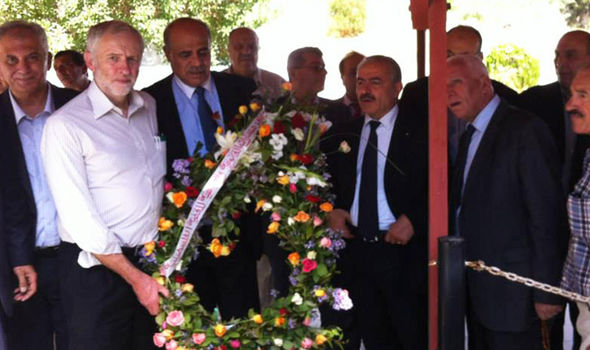 Politics has really gone through the looking glass. @jeremycorbyn denies something he wrote about doing and there are photos of him doing it but still 38% say they will vote for him means they believe what he admits happened didn’t happen

Oh and unequivocally condemning Antisemitism would be nice too!

“To go to the grave of a person behind the killing of 11 athletes, he should be ashamed and apologize.”

A Muslim anti-Semite looked closer at Islam, and that changed everything