In the year of 70 anniversaries surrounding Israel’s independence, there are many milestones that are being celebrated. One such milestone took place this week, the Altalena affiar. It brought the newly reborn state of Israel, already defending itself from an onslaught of several Arab armies, from a state of war to the brink of a civil war.

Known today as the Altalena Affair, the incident involved a ship owned by the Irgun, one of Israel’s pre-state militia groups, which set sail from France loaded with 940 would be fighters for the war that was raging and a vast supply of weapons.

The decision to smuggle the Altalena and its cargo into Israel was necessary. First off, it had been planned before the British Mandate ended it’s control over the Land of Israel.  But secondly, Israel was in dire need of all weapons.  They had less weapons than soldiers.  The War of Independence was a war of life or massacre for 600,000+ Jews in the Land of Israel. Delays prevented the Altalena from arriving in time for Israel’s independence.  In the end, the ship only sailed from France weeks after the new State’s declaration.

The Deal before the Storm

In the interim, as Israel’s independence had been declared, Prime Minister David Ben Gurion insisted that all the pre-state militias be folded into the new Israel Defense Force, IDF. The Irgun was under the control of future Prime Minister Menachem Begin who agreed to Ben Gurion’s demands. An agreement was signed for the absorption of the Irgun into the IDF consenting that the Irgun had to cease all independent arms acquisition.

Because the deal was signed after plans to bring the Altalena and its cargo to Israel were well under way, the Irgun informed the Israeli government about its plans.

Begin negotiated that 20% of the weapons would go to Irgun fighters defending Jerusalem.  By all accounts, Ben Gurion initially concurred and then abrogated this agreement. His insistence that all Israeli forces needed to be under one command was as well known as his deep dislike for Begin.

On June 11, the Altalena set sail, the same day that the first truce in the War of Independence began. Because of the truce, Ben Gurion did not want the ship’s arrival to be seen as a violation of the cease-fire.  However, Israel desperately needed
reinforcements and arms.   The reason it arrived when it came was because of a delay of one month in the plans to bring the ship to Israel.

The sense was to evade UN observers, the Altalena docked in Kfar Vitkin north of Tel Aviv on June 20. Irgun supporters and residents of neighboring towns gathered to help unload the military supplies. Most of the passengers disembarked and were taken for induction into the IDF.

Unloading the cargo continued throughout the night. In all, 2,000 rifles, two million rounds of ammunition, 3,000 shells, and 200Bren guns and ended up going to the IDF.

At the same time, the government met in Tel Aviv during which Ben-Gurion reported on events which had preceded the arrival of the Altalena. He was now adamant that Begin surrender and hand over all of the weapons.

Upon Begin’s orders, the Altalena sailed toward Tel Aviv where there were more Irgun supporters. Many Irgun members, who had joined the IDF earlier that month, left their bases and gathered on the Tel Aviv beach. Rumors circulated that the Irgun intended to launch a military coup against Ben Gurion’s government. Tension ran high.

Ben-Gurion supposedly instructed the Israeli Air Force to sink the ship at sea.  This was long before it approached the shore.  Military leaders tried to convince the volunteer pilots of Israel’s newly assembled air force to attack the ship.
The pilots refused saying they didn’t come to fight for Israel to attack Jews.

Upon arrival off the Tel Aviv beach, exchanging fire en route, Ben-Gurion ordered IDF forces on the beach to take the ship by force, and ordered the shelling of the Altalena.

The first gunner ordered to fire on the ship, a Red Army veteran, refused.  He said that he was willing to be executed for insubordination and this would be “the best thing he did in his life.”  The next gunner, a new immigrant from South Africa, refused at first.  He explained to his commander “I didn’t come to the Land of Israel to fight against Jews.”  He relented after being threatened with a court-martial.

Future Prime Minister Yitzhak Rabin commanded the IDF forces. One shell hit the ship, setting it ablaze. IDF troops on the shore also fired at the ship. Some soldiers refused to shoot, including one whose brother was an Irgun officer and was on the Altalena,
underscoring the verge of a potential civil war which, in Hebrew, literally translates as a war between brothers. 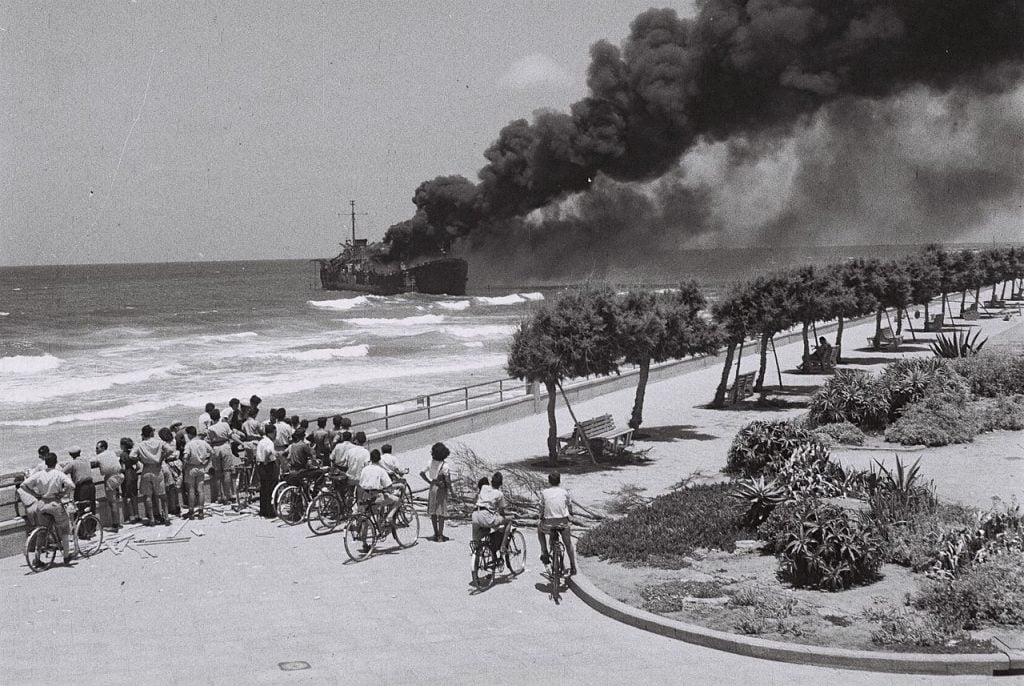 Menachem Begin, adamant to avert civil war, ordered his men not to shoot back. They raised a white flag. However, the firing continued, and some Irgun men reportedly returned fire. On the beach and throughout Tel Aviv, clashes erupted between the IDF
and Irgun forces.

Fearful that the fire would spread to the explosives on board, the captain ordered all to abandon ship. People leapt into the water, yet shooting continued at the unarmed survivors.

Begin remained on deck throughout even when they shot at him.  He only agreed to leave the ship after they evacuated the last wounded soldier.  Adding to the tense situation and fear of civil war, the government began mass arrests against Irgun soldiers who had deserted the IDF.
They arrested more than 200 Irgun members. Among these, they court-martialed eight IDF soldiers for insubordination because they refused to fire on the Altalena.

Meanwhile, Menachem Begin broadcast from his secret radio station.  He announced to his men and the country that civil war was not an option.  At all cost, he declared that we must not let things get to that point. He ordered his men not to fight back.  Then he called on them to go to Jerusalem to continue the battle for the Old City.

At only several weeks old, because of Begin’s insistence that his men not fight against other Jews, Israel averted a civil war. Israel has faced many challenges on many issues in the decades since.  There are clearly major divisions on many levels within Israel.  But Menachem Begin’s model that he set off the Tel-Aviv coast 70 years ago this week has prevailed.  No war between brothers.

While tensions then and since are not something to celebrate, this is still a historic milestone.  This episode largely defined some of the fault lines of Israel back in it’s earliest days. Israel is a democracy where fighting against one another goes against the national ideal. On that level, this anniversary, as sad as it is, remains something to celebrate. 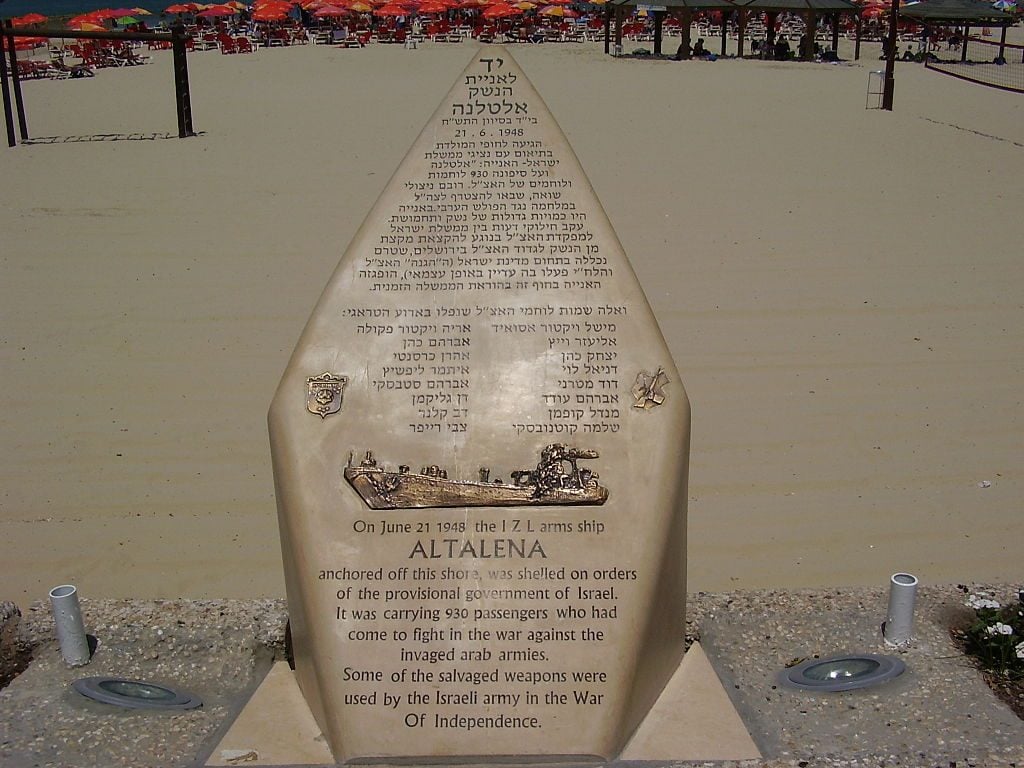 Born and educated in the U.S. and immigrated to Israel in 2004. Jonathan is married and the father of six. He is the President of RunforZion.com. Throughout his life and career, he has had the privilege of working with many Christian supporters of Israel and has initiated several innovative projects that have increased meaningful connections to Israel and financial support for Israeli non-profits. He can be reached at [email protected]

Conan O’Brien tries to convert to Judaism in 90 minutes, and it’s HILARIOUS!