11 malnourished kids were found in an Islamic extremist terror training camp that was set up on the border of New Mexico and Colorado. US Law enforcement believe this camp is part of a larger group of radical Muslims in the USA. The FBI were watching this camp, but held off from moving in to stop it. The Sheriff’s Department had enough of watching and they moved in to stop this camp, free the kids and make the arrests.

The police arrested Siraj Ibn Wahhaj during the raid together with two of his sisters. They are the leaders of this Islamic terror training camp. The arresting Sherrif, Taos County Sheriff Jerry Hogrefe, described them as “most likely heavily armed and considered extremist of the Muslim belief.”

Wahhaj and his sisters are the children of infamous Brooklyn Imam Siraj Wahhaj. Wahhaj was listed as a co-conspirator in the 1993 World Trade Center bombings. His connections include the Council on American Islamic Relations (CAIR) and the Islamic Society of North America (ISNA).  These are both US fronts for the global Sunni Muslim Brotherhood organization.  Their goal is cultural jihad – to destroy America from within.

Imam Wahhaj wants to the USA to be more Islamic. That is the exact strategy of the Muslim Brotherhood organization, as exposed in the documents presented by the FBI in the Holyland Foundation trial.

In the following audio, you can hear Imam Wahhaj advocating the use of street violence in the United States for the benefit of Islam. He is basically calling for armed jihad in the streets of the USA to create chaos and spread Islam.

Imam Wahhaj also happens to be a mentor to Islamist Democrat Linda Sarsour! A mentor that Sarsour is very proud of. She is always thanking him, mentioning him and speaking together with him at events.

Linda Sarsour is a rising star in the liberal/progressive Democrat community. She became famous as the co-founder of the Women’s March. At a conference last year, Sarsour began her speech thanking her “favorite person in this room … Imam Siraj Wahhaj, who has been a mentor, motivator, and encourager of mine. Someone who has taught me to speak truth to power & not worry about the consequences.”

Sarsour’s Twitter page is rife with continuous affection for the radical Imam. 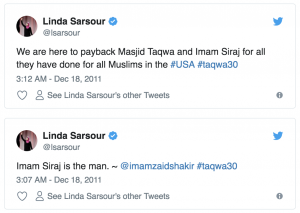 Who is the Al-Qaeda Terrorist Demanded to be...