Home Jewish People The Holocaust When every country abandoned the Jews, there was one nation that was...

Jews during the Holocaust were turned down by many countries. They sent them straight back to their deaths. But not The Philippines.

Jews During the Holocaust

When Jews during the Holocaust tried to escape and gain entry into countries around the world, many turned them away. It is such a heartbreaking truth that the Jewish people needed refuge, and nation after nation sent men, women, and children right back to the Nazis to be killed. We are talking about innocent people who were slaughtered in cold blood. Why didn’t the world help? Why did so many turn a blind eye to the atrocities taking place? Although it is so unbearable to think about that, we cannot forget the one country that opened their doors and saved many Jews.

One special nation across the world from Germany accepted the Jewish people and gave them protection. The Philippines, under the leadership of President Manuel L Quezon, could not stand by and watch an innocent nation be destroyed. He wanted to help. He felt it was the “right thing to do.” Quezon wondered why other countries did not help. Over 1300 Jewish people were saved because of Quezon’s courage and bravery to do the right thing when everyone else would not.

In the Talmud it says that whoever saves one life, it is as if he saved an entire world. It makes so much sense. Imagine how many Jews are alive today because 1300 Jews were saved during the Holocaust by one man. Children, grandchildren, great-grand children. Saving one person means saving their future offspring as well.

The Jewish nation is forever grateful to people like President Quezon who did everything in their power to help during the Holocaust. 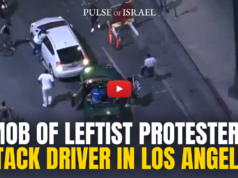 The European governments are trying to hide this video

BBC denies the Biblical City of David ever existed