Top Posts
Never before seen footage – police let crowd walk into...
Israel Smacks Iran In Heavy Bombardment Near Iraq
Biden proved how racist his administration will be with new...
The discoveries that prove that the Exodus from Egypt was...
IDF Prepares First Strike Options Against Iran
Biden’s Victory Ignites The Middle East “Peace” Grifters Once Again...
Arnold Schwarzenegger mocks Kristallnacht with comparison to event at Capitol
When Reagan gave this speech, he didn’t realize how perfect...
Sec. of State Mike Pompeo tasks Americans with bringing America...
Illegal anti-Netanyahu protests at 5 am – in the middle...
Did protestors violently storm the Capitol Building? This Footage Shows...
Netanyahu and wife forced into secure area after protesters break...
Holocaust Survivors Come Alive in a Magical Song
Iran Deploys Suicide Drones In Yemen, In Range Of Israel
A Hassidic singer gave the world a reason to “rise...
Tag:

I’ve Never Laughed So Hard At a Music Video! The Voca People Are Hilariously Amazing!

The Voca People are probably the most unique musical sensation that emanates from the Land of Israel.  They have performed in front of millions, but more people know them from their online video performances like the one below.  They use no instruments and are 100% a-Capella and beat-box.

Enjoy Toccata and Fuge in D minor by Bach, I Get Around by The Beach Boys, Holiday by Madonna, Sweet Dreams with the Eurythmics, Cotton Eyed Joe by Rednex and much much more.

What makes them so unique is not just their musical talents and their freaky dress, but their wit.  They truly entertain with their amazing mix of song and comedy.

Their website puts it like this:  “Full of energy and bursting with comedy and fun, this international phenomenon features more than 80 all-time favorite hits from Madonna to Michael Jackson via Mozart! No instruments, no sound effects – just eight incredible, talented singer-comedians.” 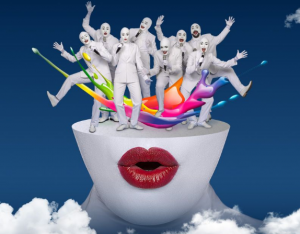 They perform in North and South America, all over Europe, China, and Central America too.

The Voca People is an Israeli based ensemble that performs locally and around the world.  They change the language and songs according to the country where they happen to be performing. A total hit!