In 1834, a 17-year-old a Jewish Moroccan girl, Solica (Sol) Hachuel, was publicly executed in Fez for refusing to convert to Islam.

The Nineteenth Century was particularly perilous for Jews living under Muslim rule.  Forced conversions, violence, imprisonment for ransom, and even rape of young women were prevalent.  Sol was born in 1817 in the city of Tangier.  Stories of her unique beauty, wisdom and piety spread throughout the region. 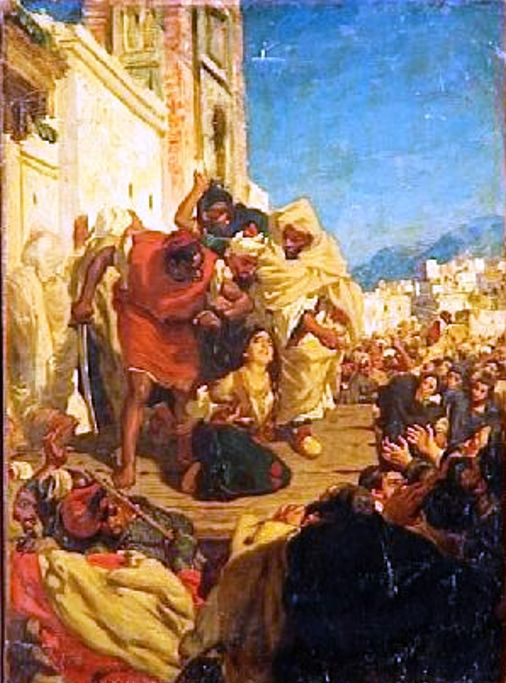 Sol befriended a Muslim woman who tried unsuccessfully to convert her to Islam.  When all attempts failed, the woman reported Sol to the authorities, claiming that Sol had converted to Islam, then recanted.  Under Islamic law, apostasy (renouncing religion) is punishable by death.  Sol was brought before the Bahsa (Governor) of Tangier, Arbi Esudio, accused of apostasy.

The Basha believed the allegations and threatened to load her with chains, have her torn to pieces by wild beasts; that she would never see the light of day and perish from hunger, unless she “returned” to Islam.  Our heroine responded [paraphrasing]:

“You have been deceived sir.  It was proposed to me but I did not consent.  I will patiently bear the weight of your chains; I will give my limbs to be torn to pieces by wild beasts; I will renounce forever the light of day; I will perish of hunger, and when all the evils of life are accumulated on me by your orders, I will smile at your indignation, and the anger of your prophet, since neither he nor you have been able to overcome a weak female!  It is clear that Heaven is not auspicious to making proselytes of your faith.  Never, never did I leave my faith. I never became a Muslim, and I never, ever will! [In Ladino] A Jewess I was born and a Jewess I wish to die.”

Sol was chained, an iron collar place around her neck and imprisoned in a dungeon.  Appeals to Spanish and other authorities were unsuccessful.  The Basha ordered her moved to Fez, for her fate to be decided by the Sultan.  Her parents were required to pay the transportation fee, or suffer 500 lashes.  The Spanish Consul in Tangier agreed to pay this fee.

In Fez, Sol was brought before the Sultan, Muley Abderrahman.  He was taken with her beauty and offered to marry her if she converted.  She refused.  The matter was turned over to a Cadi (Islamic judge).  The Cadi summoned the Jewish leaders, including Rabbi Rafael Hassarfati, the chief rabbi of Fez.  The Cadi advised the sages that if Sol refused to convert, she would be beheaded, and the Jewish community punished.

The sages met with Sol, plead with her to convert to spare her life, but she refused.  The Cadi ordered that she be beheaded in the public square on market day.  Sol was permitted to wash her hands and say the Shema.  In one final attempt to compel a conversion, the executioner wounded her.  She declared,  “Do not make me linger – behead me at once – for dying as I do, innocent of any crime, the God of Abraham will avenge my death.”  She was beheaded.

The Fez Jewish community was required to pay for return of Sol’s body and blood-stained earth for burial.  She was originally buried in the ancient Jewish cemetery in the Jewish Quarter of Fez, next to Rabbi Eliayu Hassarfati (1715-1805).  In 1884, the old cemetery was decommissioned and Rabbi Eliayu and Solica transferred with fanfare and ceremony by the Jews of Fez.  Sol is buried between two other honored Moroccan Jews, Rabbi Avner Israel HaTsarfati (1827-1884), Rabbi Eliayu’s great, great grandson, who requested to be buried next to her, and Rabbi Yehuda Ben-Attar (1656-1733).  They rest together today in the middle of the Jewish cemetery of Fez.

Her matzava (tombstone) reads in French and Hebrew, respectively:

Here lies Miss Solica Hachuel, born in Tangier in 1817, refusing to enter [rentrer] into the Islamic religion.  Arabs assassinated her in Fez in 1834, uprooting her from her family.  The whole world mourns this saintly child.

The gravestone of the righteous Solica Hachuel, a virgin maiden who greatly sanctified the Name of Heaven and died a martyr in the glorious city of Fez in the year 5594 (1834) [and is] buried here. May the Lord protect her.  May her merit protect us. May it be God’s will. 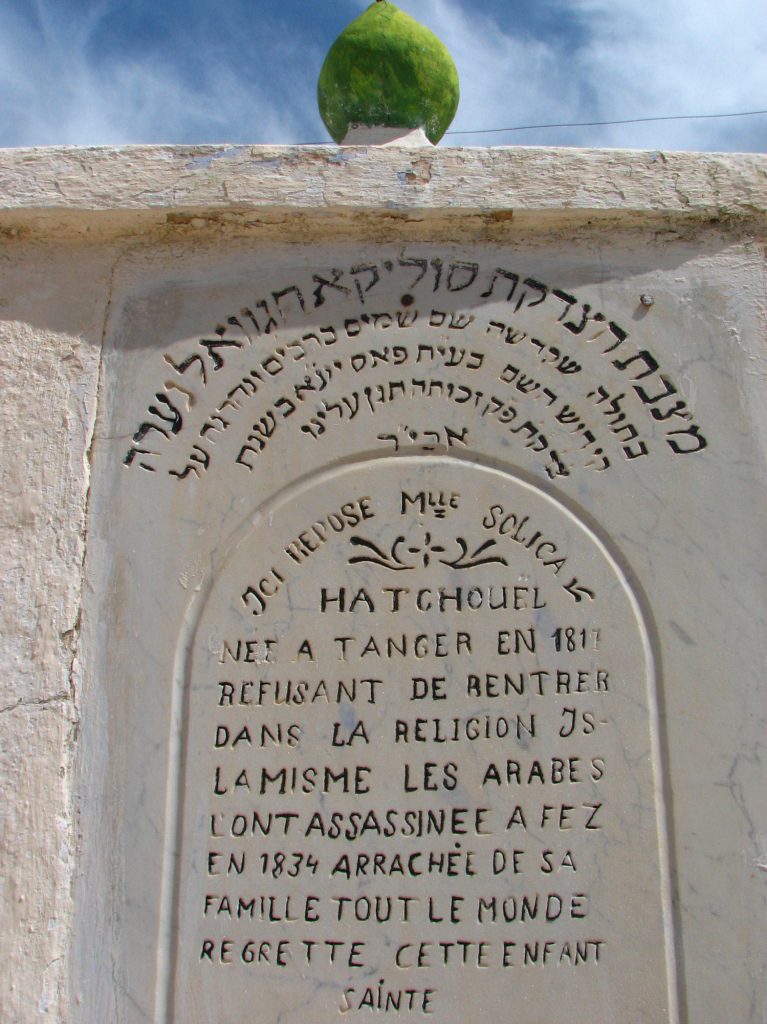 May the memory of Solica Hachuel, an innocent girl who chose death over conversion, remain an everlasting inspiration and blessing.

Is Israel’s Deep State Preparing to Take Netanyahu Down?

This is how the United Nations nullified the Bible