Top Posts
Israel Readies Swift Response To Terror
Seven Murdered In Deadly Jerusalem Terror Attack
Why Did Bibi Meet Jordan’s King?
The Moments the Nazis Planned the Most Vicious Crime in...
Is WW3 Upon Us?
Ben Shapiro Exposes Why Dr. Fauci Really Retired Early
Watch What Happened at This Holocaust Remembrance Day Ceremony
Trump Unleashes Plan to Stop China from Taking Over America
Watch the Spelling Bee Judges Stumble Over the Definition Of...
Russia Warns Israel Over Iran
Biden, NATO and World War With Russia
The Ukraine war starts to undermine Israeli security
U.S. and Israel Launch Major Military Drill – a Strike...
Musk Goes To War Against The World Economic Forum
A Famous Jewish Philosopher Gave This Powerful Message About the...

Ignoring explicit orders of the Israeli Supreme Court, The Muslim Waqf organized 1,000 Muslims to work night and day recently. They cleared piles of dirt filled with evidence of the Jewish Temple and the historic Mount. They took advantage of the Jewish gesture of closing the Temple Mount for Jews during Ramadan and went to work destroying our history.

So What Happened this Ramadan on the Mount?

The Muslim Waqf did what so many faithful Muslim officials do when faced with a legal prohibition, they cheated. They took advantage of the Israeli gesture of closing off the Temple Mount to Jews on the last week of Ramadan to complete their heinous crime against history and culture. They recruited more than 1,000 men to remove the piles of soil. This time making sure to get rid of all the evidence of there ever being a Jewish Temple there.

The Temple Mount is one of the most important historic sites in the world. An archeologists dream job. It has religious significance to all three monotheistic religions and it still has yet to be explored. Why? Because the Muslims warn that they will go to war against Israel if we dug on our holy site. Why? Because they don’t want us to find the proofs that the Temple once stood there.

Unfortunately, instead of allowing us to dig the Mount properly, the Muslims authorities on the mount destroy the finds so that we can never dig there. And the Israeli authorities do nothing to stop, or punish them, for their destruction. These destructive Muslims actions on the Mount are making an eventual proper archaeological dig impossible.

The piles of earth that the Muslims are clearing out on the Mount, as seen in the video, were created by an illegal renovation the Muslim authorities began to carry out in 1999, and continued into the 2,000s.

Back then it was also illegal for them to carry out such renovations, but they did it anyway. While they requested to build a small Mosque on the Mount, that small project ended up carrying out 400 trucks of the landfill with Temple Mount artifacts. A huge travesty. 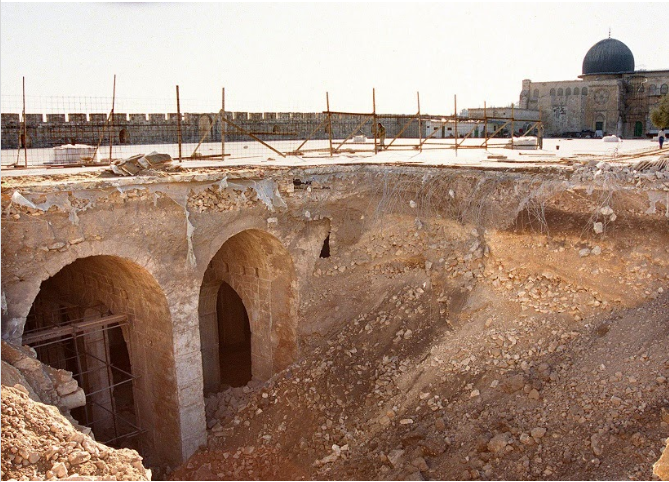 They then dumped the 400 truckloads of the landfill, with the Temple Mount artifacts, in a valley on the outskirts of Jerusalem. Thankfully, Israeli archaeologists found out about the dump. The archaeologists began collecting the soil, with the artifacts, to then conduct a proper archeological sifting project to document the history of the Mount. Thus was born the Temple Mount sifting project.

The Temple Mount sifting project is a must see tourist site for anyone visiting Jerusalem today. Every visitor takes an active part in sifting through the Temple Mount soil, dumped illegally by the Muslims. Almost every person who participates in this sifting project finds some archeological find of hundreds, if not thousands, of years old from the Mount.

The sifting project is a huge archeological challenge. Proper archeological projects dig one level of soil at a time, with toothbrushes! This allows the archeologists to identify each artifact with the proper time period, based on the level of soil it was found. Since the Muslims used tractors instead of toothbrushes, and they dumped the 400 truckloads of the landfill all together. Thousands of years of soil, with artifacts, were all mixed together.

One Muslim crime after another on our Holy Temple Mount, and the Israeli authorities are powerless.

While we are big fans of Prime Minister Netanyahu for so much of what he does for Israel, he has one big weakness. He consistently ignores the Muslim crimes on the Temple Mount, as have all previous Isreali Prime Ministers. Netanyahu prefers to ignore the Muslims crimes on the Mount and not create a “religious” conflict with the Muslim world, while there are other, more critical issues to deal with. The price? A policy of appeasement towards the Muslims on the Mount that discriminates non-Muslims. In addition, the continued destruction of Temple Mount artifacts.

You Won’t Believe What You Can Still See...

Why Did Bibi Meet Jordan’s King?

Musk Goes To War Against The World Economic...

Russia and China Prepared To Take Down The...

The unhinged reaction to the new Israeli government

The IDF Story that Highlights Why Many Israelis...

The Shocking WWII Story That Nobody Knows About