Terror attacks do not only occur in the Middle East. They happen in Europe and the United States too. Sarri Singer is the living example of this. She was both in New York on 9/11 and in Israel when a terror attack took place. She lived through both of them. But in Israel, she had a really close call. Some were less fortunate. She was on a bus in Jerusalem that a suicide bomber boarded. The last thing she could have expected is that this person actually boarded the bus with the express intention of killing as many people on the bus as possible. That’s exactly what he did, in what would come to be known as one of the worst suicide bus attacks in history.

There are multiple methods of fighting and defeating terrorism. The key element to fighting the battle is to be persistent and brave in standing up to the few terrorists who are looking to wreak havoc on the masses. First of all, we need to understand that terrorists want to disrupt the lives that regular people live. So, the first line of response to all terrorists needs to be an iron resolve to not change our lives one iota in terms of our daily routine. We can arm ourselves with better things to defend ourselves. But, the routine must continue. Secondly, terrorists want to change the status quo. The status quo must never change in response to terrorism. Thirdly, terrorists want the whole world to walk to their tune and not to the direction of what the rest of the world thinks is reasonable. This is where some ruthlessness and resolve is necessary. Where terrorists are willing to disrupt and use any tool they can get their hands on to change the world, the proper authorities need to be created that will root out the terrorists while they are still in their planning stages. The battle will probably never end. But it will require persistence and a willingness to never back down. As Winston Churchill said at the dawn of World War II, “Never Surrender!”

Sarri Singer represents all that is brave and righteous in the fight to never surrender to terrorists. We must prevail. 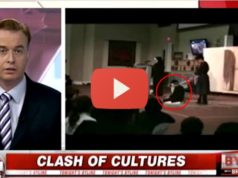 A terrifying interview with a female “Palestinian” suicide bomber

When commuters in Hong Kong stood up to Muslim Migrants

A father slams BBC for giving his child’s murderer a platform...