Top Posts
Jewish Child Attacked in broad daylight on famous LA street
The discoveries that prove that the Exodus from Egypt was...
Female Terrorists Attack Multiple Locations in One Day
Ben Shapiro: World Leaders Laugh at President Biden at the...
Israel Prepares To Attack Iran After Hardliner Becomes The New...
What Arabs really do on the Temple Mount was caught...
Imam Makes the Case for Israel in under Two Minutes
Hamas Continues To Attack, While The Bennett-Lapid-Abbas Coalition Teeters On...
UAE and Israel Are Set To Revolutionize Global Oil Markets
Did The FBI Organize The Riots On Jan. 6th?
The Most Important Speech about the Temple Mount for Today’s...
The Sick Child Abuse that Ilhan Omar and “The Squad”...
Facebook Censors Popular Jewish Website for Calling out Antisemitic Content
Anti-Israel Protesters Yell the Truth Loud and Clear on the...
Israelis Triumphantly Celebrate Traditional Jerusalem Day Parade Over Hamas Threats

Around 2,500 people protested outside the Labour Party Headquarters in London on Sunday. The protestors were calling for Labour Party leader Jeremy Corbyn to end the antisemitism within the Labour party.

Jew and non-Jew stood together outside the Labour Headquarters. Some of the non-Jews who attended described themselves as former anti-semites, but their Christian values brought them to support Jews.

British culture in general and British Jewry, in particular, don’t like to make waves.  Therefore the existence of this protest is definitely a sign that antisemitism has become a huge problem within the party. Many British Jews today feel less safe in Britain as a result of Jeremy Corbyn’s leadership of the Labour party.

Lately, the party ranks and leadership are exhibiting non-stop instances of anti-semitism.

Here is a fabulous insight into the problem people have with Corbyn and antisemitism.

“The first “D” is the test of demonization. When they demonize the Jewish state. Or when they blow out of proportion Israel’s actions. When they make comparisons between Israelis and Nazis and between Palestinian refugee camps and Auschwitz – this is anti-Semitism, not legitimate criticism of Israel.”

“The second “D” is the test of double standards. When criticism of Israel is applied selectively. Or when Israel is singled out by the United Nations for human rights abuses while the behavior of known and major abusers, such as China, Iran, Cuba, and Syria, is ignored; when Israel’s Magen David Adom, alone among the world’s ambulance services, is denied admission to the International Red Cross – this is anti-Semitism.”

“The third “D” is the test of delegitimization: when Israel’s fundamental right to exist is denied – alone among all peoples in the world – this too is anti-Semitism.”

Gideon Falter, Chairman of the Campaign Against Anti-Semitism spoke at the rally. He mentioned that he would be bringing a court case against Labour Party candidates and members. With a focus on those who are writing Holocaust denial theories. Falter said that “if Labour party does not start to take action in the party there will be another demonstration in the middle of May followed by court action.”

Here is but one example on the antisemitism that exists within the party leadership as well:

Meet Dorian Bartley. He is a big fan of Jeremy Corbyn, and an active member of the Labour Party. He is an elected officer, with responsibility for Black Asian and Minority Ethnic (BAME). 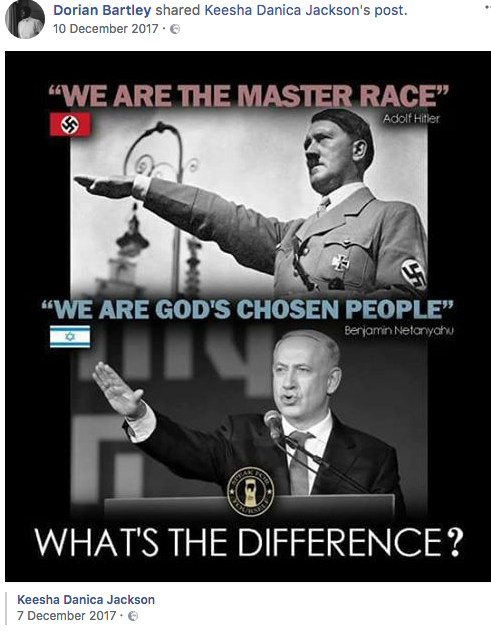 Powerful story of how a child, given the right tools, can overcome anything

Google’s Head of Diversity Gets Blasted for Antisemitic...

The Italy Analogy that Proves Anti-Zionism is Antisemitism