Top Posts
Never before seen footage – police let crowd walk into...
Israel Smacks Iran In Heavy Bombardment Near Iraq
The discoveries that prove that the Exodus from Egypt was...
Biden proved how racist his administration will be with new...
IDF Prepares First Strike Options Against Iran
When Reagan gave this speech, he didn’t realize how perfect...
Arnold Schwarzenegger mocks Kristallnacht with comparison to event at Capitol
Biden’s Victory Ignites The Middle East “Peace” Grifters Once Again...
Sec. of State Mike Pompeo tasks Americans with bringing America...
Iran Deploys Suicide Drones In Yemen, In Range Of Israel
Illegal anti-Netanyahu protests at 5 am – in the middle...
Did protestors violently storm the Capitol Building? This Footage Shows...
Netanyahu and wife forced into secure area after protesters break...
Holocaust Survivors Come Alive in a Magical Song
A Hassidic singer gave the world a reason to “rise...

The following Muslim news report shows the systematic delegitimization of the Jewish people, our heritage and our connection to Jerusalem and the Land of Israel. The story of Hannukah took place 2,200 years ago, in the land of Israel. It was a historic rebellion of the Jewish people against the Greek Empire that defiled our Temple in Jerusalem and tried to destroy the Jewish people. Still today, 2,200 years later, Jews around the world celebrate the miracles of that victorious rebellion against the Greeks.  Yet many in the Muslim world prefer to ignore history and delegitimize us. This is how a “Palestinian” Arab news channel reported the traditional lighting of the Hanukkah lights at the Western Wall of the Temple Mount. This delegitimization of our history and our connection to our homeland is the epitome of the new antisemitism of today.  Its ultimate conclusion is that all means can be used to get rid of the Jews from Israel. 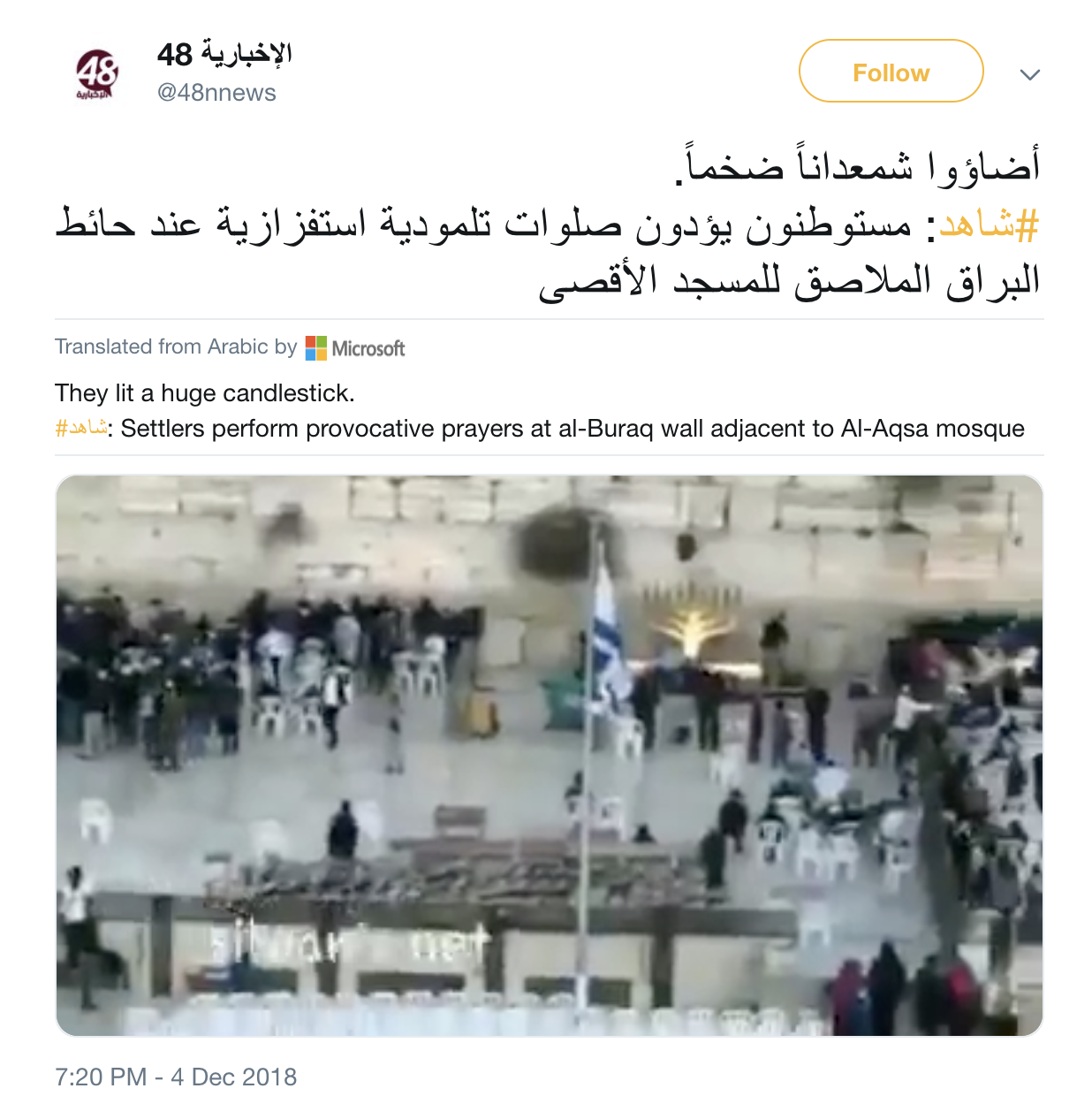 What’s the Problem with the Report?

1. The report refers to all Jews as settlers because they look at every Jew living in every part of Israel as a foreigner. While enlightened people think that if only the Jewish “settlers” who live in Judea & Samaria were expelled, then peace would happen. However, the truth is that they believe that even Jews who live in Tel Aviv, Haifa, Ashkelon etc. are illegal “settlers and must be gotten rid of.

2. They report that our holiday prayers are provocative. What is provocative by Jewish prayer?

3. “They lit a huge candlestick”. No, we don’t light a candlestick, we light a Menorah that represents the Menorah that was lit each day in the Jewish Temple in Jerusalem thousands of years ago. Of course, they can not acknowledge that.  That would destroy their argument that Jews have no connection to Jerusalem.

4. Al-Buraq wall and Al-Aqsa Mosque. Whereas Jewish history is filled with documented facts in the history books, the story of Mohammad’s horse flying in the sky to the Al-Aqsa Mosque was a dream! History and archaeology prove that the Jewish Temple stood in the center of Jerusalem. No facts or archaeology prove that Islam has any connection to Jerusalem. In addition, while Jerusalem is mentioned more than 660 times in the Jewish Bible, Jerusalem is not mentioned even once in the Muslim Koran.

In case it escaped your attention, the dome is built on top of the Second Temple.

There were no Arabs in the land of Israel.

So who’s the occupier?

Jerusalem has been the soul of Judaism and in every prayer, every song, every Jewish heart for almost 4,000 years.

Pro-tip: if the sight of Jews lighting a menorah at the Western Wall fills you with anger and hatred, you might just have a problem with Jews.

PM Netanyahu Sends Direct Message to the People of Lebanon

Netanyahu and wife forced into secure area after...

NO THIS IS NOT A JOKE: Nancy Pelosi...