Top Posts
CNN Makes Outrageous Comment about Muslim Terrorist Taking Jewish Hostages
CDC Director’s Makes Shocking Admission about COVID
Jerusalem Hospital Refuses Surgery To Unvaccinated Woman
Ilhan Omar got Completely Owned by a Jewish Zionist after...
The Poland of the 1930s has Returned – What’s Happening?
WATCH: Arab Attacks Jerusalem’s Deputy Mayor With A Knife
New VA Governor Fighting Back Against the Progressive Agenda on...
UK Ending Vaccine Passports and Mask Mandates
Microsoft’s Shocking New Feature Proves the Left has Completely Lost...
UKRAINE CRISIS: This Is How Russia Controls NATO
The Story of David and Goliath Is Not Just A...
New Nuke Deal, Prelude To War?
This Is How Iran Is Tying A Noose Around Israel
The Jewish teen who wowed America’s Got Talent and the...
The Discoveries that Prove that the Exodus from Egypt was...

The ADL yesterday attacked an organization that exposes the antisemitism of Muslim activists on US college campuses. The ADL is NOT supposed to defend antisemites.  They need to defend Jews from the antisemites! Something very wrong is happening to the ADL under its new leadership.

Here is the public attack of the ADL. 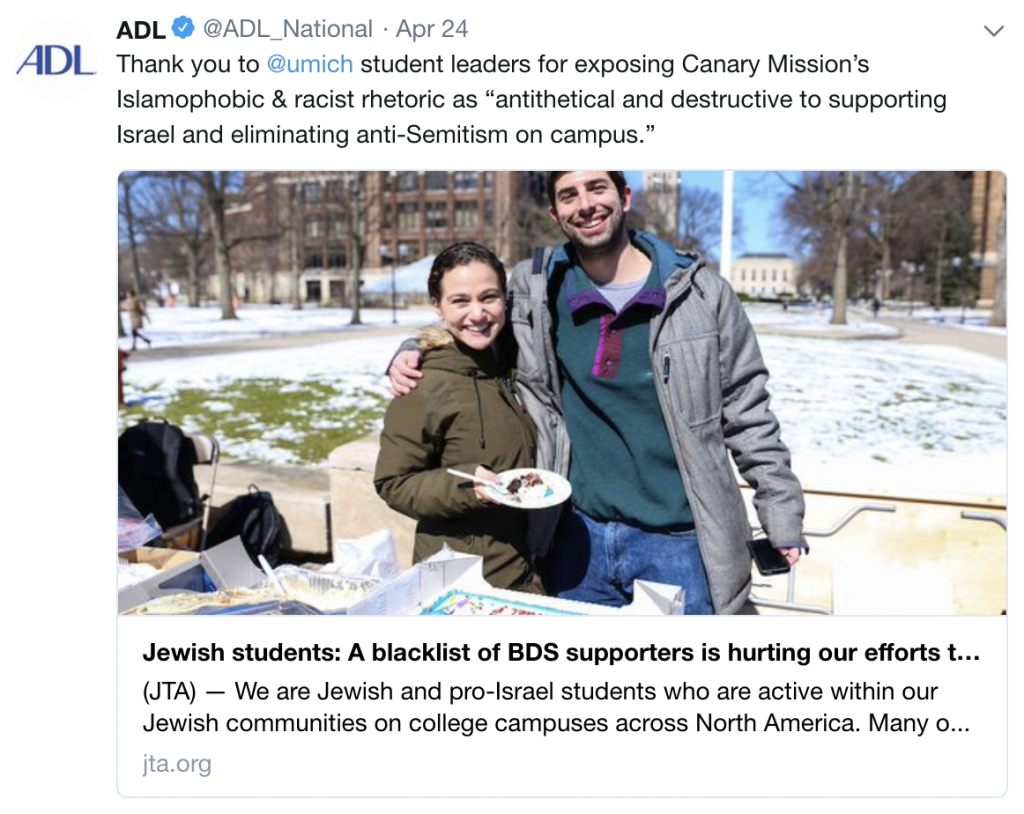 Canary Mission is the organization the ADL attacked for being Islamaphobic and racist. All the Canary Mission does is document and publicize the racist, antisemitic comments, and actions, of student activists and Professors on college campuses. Please watch the Canary Mission video below and tell us your thoughts.

If you think this issue is as important as we do, please click here to boost this post.

The ADL’s mission is very clear on their website “To stop the defamation of the Jewish people, and to secure justice and fair treatment to all…” Canary Mission’s mission is also very clear “If you’re racist, the world should know.”  Yet the ADL attacks Canary Mission for doing a job that the ADL should be doing.  The ADL should be calling out the racism and antisemitism of Muslim and anti-Israel activists on college campuses. Instead, unfortunately, the ADL calls this type of activity “Islamaphobic” and “racist”.  Why is documenting antisemitic comments of Muslim antisemites Islamaphobic and racist?

My response to the ADL’s attack on Canary Mission

Total absurdity!!! The @adl under @JGreenblattADL call out @canarymission for doing the work that they r supposed to be doing to protect Jewish students on college campuses! This tweet proves that the ADL has gone to the dark side. So sad. They r standing up 4 our enemies! https://t.co/5AdZNjf4lO

Canary Mission’s response to the ADL attack on them

.@ADL_National has a long and proud history of fighting anti-Semitism. We are saddened to see that an ADL social media staffer has falsely accused us of “racist rhetoric” and “Islamophobia” without providing a shred of evidence. 1/2

I’m not as optimistic as Canary Mission about the ADL returning to its proud history of fighting antisemitism.

I believe the current sad state of the ADL is indicative of the horrendous state of the majority of “liberal” American Jewry. The ADL joined American Jewish college student leaders in calling the Canary Mission Islamaphobic and racist. All the Canary Mission does is publicize public antisemitic comments uttered by antisemites. That is not Islamaphobic or racist. That is critical work to document information for everyone to know about and better fight the antisemites. By publicizing their antisemitic rhetoric, Canary Mission is letting the antisemites know they can not get away with their antisemitism without consequences. Why are today’s liberal Jews afraid to fight this antisemitism?

Anti-Israel focused antisemitism emanating from the Muslim world is the fastest growing antisemitism today. Both in America and around the world. It is antisemitism masked as anti-Zionism.

The New Israel Fund, J Street, Jewish Voice for Peace, and many other “liberal” Jewish organizations prefer to defend our enemies instead of defending Jews.   This is what the ADL is doing as well. They all totally misunderstand the BDS (boycott, divest, sanctions) movement and antisemitism in the Muslim world. They think that it is only about hurting Israel because of a disagreement on policy. But it is not. It is about hating and dehumanizing Jews, all Jews.

The BDS movement is an antisemitic movement. They proudly shout out at rallies “From the River to the Sea, palestine will be free.”  A constant refrain is “Long live the intifada.”  Those calls represent classic antisemitism.

Let’s break this down

Chant #1: “From the river to the sea, palestine will be free”.  If palestine will be from the river to the sea then they are against the Jews having their own state.  It’s that simple.  Basically, they are against the Jews ability to have any self-determination. That is discriminatory and racist. All other nations are allowed to self-determination but the Jews? This is antisemitism and racism.

Chant #2: “Long live the intifada.”  The Arab Muslim intifada refers to the armed uprising against Israel.  Boys, girls, men and women, of all ages, use knives, cars, stones and anything they can, to murder innocent Israelis.  Why?  Because in their minds there is no such thing as an innocent Israeli. This is a call in full support of violence and murder of innocent Jews! Nothing is more antisemitic than that.

Hamas, Hizbullah, the PLO (today’s Palestinian Authority), have all been clear on their desire to kill Jews all over the world, not just in Israel.

The Hamas charter quotes Islamic religious texts to provide justification for fighting against and killing Jews all over the world.

Jeffrey Goldberg has followed the Hizbulah, in The New Yorker in 2002, described Hizbullah as a “very, very radical, anti-Semitic organization.” He stated that Hezbollah has embraced an ideology “melding of Arab nationalist-based anti-Zionism, anti-Jewish rhetoric from the Koran, and, most disturbingly, the antique anti-Semitic beliefs and conspiracy theories of European fascism.”

Hassan Nasrallah, leader of Hizbullah, on 9 April 2000, said: “The Jews invented the legend of the Nazi atrocities…. Anyone who reads the Koran and the holy writings of the monotheistic religions sees what they did to the prophets, and what acts of madness and slaughter the Jews carried out throughout history…. Anyone who reads these texts cannot think of co-existence with them, of peace with them, or about accepting their presence. Not only in Palestine of 1948 but even in a small village in Palestine, because they are a cancer which is liable to spread again at any moment.

Marcus and Crook document how the killing of Jews is presented both as a religious obligation and as necessary self-defense for all humankind.

“Palestinian Authority elites have built a three-stage case against Jewish existence. Much as a prosecutor might build a case demanding a death sentence. As their expert witness, they bring Allah Himself. Allah is said to have sent a message through the Prophet Muhammad that killing Jews is a necessary step to bring Resurrection. Stage 1 is characterized by collective labeling of Jews as the enemies of Allah, possessing an inherently evil nature. The second stage 2 teaches that because of their immutable traits, Jews represent an existential danger to all humanity. Stage 3 presents the necessary solution predetermined by Allah. The annihilation of Jews as legitimate self-defense and a service to God and man.

“Liberals” Don’t Get It

All of these “liberal” Jewish organizations are derelict in understanding the BDS.  The BDS is a purely anti-Israel cause, and is totally anti-semitic. The BDS is totally silent when it comes to the antisemitism of the Muslim anti-Israel activists.  This shows that the BDS is complicit with the growth of antisemitism today on US college campuses and in American society. Their defense of these Muslim anti-Israel activists under the banner of “Islamaphobia” and “racism” is plain wrong. Canary Mission is  actually doing what ought to be done to fight antisemitism on college campuses.

What the ADL and the Jewish college students misunderstand is that BDS cannot be fought by compromising on anti-Israel BDS resolutions. The fight is NOT about the BDS resolutions. The true fight is the blatant antisemitism of BDS supporters on campus. Yet, Jewish campus leadership and Jewish organizations are still ignoring this.

I will repeat this super important, yet very basic fact – that people ignore. It’s not about fighting BDS! It’s about fighting the virulent antisemitism emanating from Muslim student activists and growing on college campuses.

Canary Mission Gets It

Canary Mission right now is really the only organization putting up that fight.

Jewish student leaders should choose the direction of the Canary Mission over the ADL. But if they don’t, Muslim based antisemitism will continue to grow on US college campuses and across the USA.

The joys of Hasidic fashion in Bnei Brak!

Why are so Many Young Jewish Professionals Moving...

Sidney Poitier Tells the Story of the Jewish...

Why Major Sports Networks are Talking About this...

The Orthodox Jews Who Plan to Keep Shabbat…While...

Former Missionary Speaks Out and Warns of Missionary...

The Two Conditions for Happiness that Anyone Can...