Top Posts
CNN Makes Outrageous Comment about Muslim Terrorist Taking Jewish Hostages
CDC Director’s Makes Shocking Admission about COVID
Jerusalem Hospital Refuses Surgery To Unvaccinated Woman
Ilhan Omar got Completely Owned by a Jewish Zionist after...
The Poland of the 1930s has Returned – What’s Happening?
WATCH: Arab Attacks Jerusalem’s Deputy Mayor With A Knife
New VA Governor Fighting Back Against the Progressive Agenda on...
UK Ending Vaccine Passports and Mask Mandates
Microsoft’s Shocking New Feature Proves the Left has Completely Lost...
The Story of David and Goliath Is Not Just A...
UKRAINE CRISIS: This Is How Russia Controls NATO
New Nuke Deal, Prelude To War?
This Is How Iran Is Tying A Noose Around Israel
The Discoveries that Prove that the Exodus from Egypt was...
The Jewish teen who wowed America’s Got Talent and the...
Tag:

Watch: A Miracle! Girl Stabbed 9 Times in the Chest by Terrorist Lives and Says Thank You!

Her name is Shuva Malka. She is an 18-year-old girl who was stabbed multiple times in the chest on her way to take her end of year high school exams in Civics. Imagine that, right in the middle of the street of the Israeli city of Afula a Muslim terrorist brutally stabbed Shuva NINE times.

Thank G-d she has lived to say thank you to all those who have been praying for her. Her words and smile are electrifying.

“The Jewish people have a lot of strength. We have to overcome with our prayers. That is what strengthened me, and that is what should strengthen all of us together. I give a big hug to everyone. Thank you very much to everyone who has supported us. Thank you to the one above. Thank you.”

Tomer MazalTov was the taxi driver who was the hero of the day! MazalTov, which is the Hebrew word for congratulations, followed the attacker and helped the police apprehend him. Police arrived at the scene and identified the terrorist trying to flee. The stabber refused to stop. So police officers shot at the suspect’s legs, and he collapsed to the ground.

Shuva Malka was in very serious condition. Her family had called upon the whole Jewish people to pray for her.

“G-d gave us a great miracle,” said Malka’s mother. “She was on her way to exams when she saw a terrorist with a knife in front of her.”

“He brutally stabbed her several times,” she continued. “I expect the State to take responsibility for the safety of our children, so they that can feel safe while waiting at a bus stop, without having to worry about dangers lurking ahead.”

Thankfully, the family’s prayers have been answered and Shuva is recovering from the multiple stabs to her chest.

The terrorist was identified as Nur a-Din Shinawi, a Jenin resident in his twenties who fled the scene and was caught a short time later.

Shuva Malka injured after the stabbing 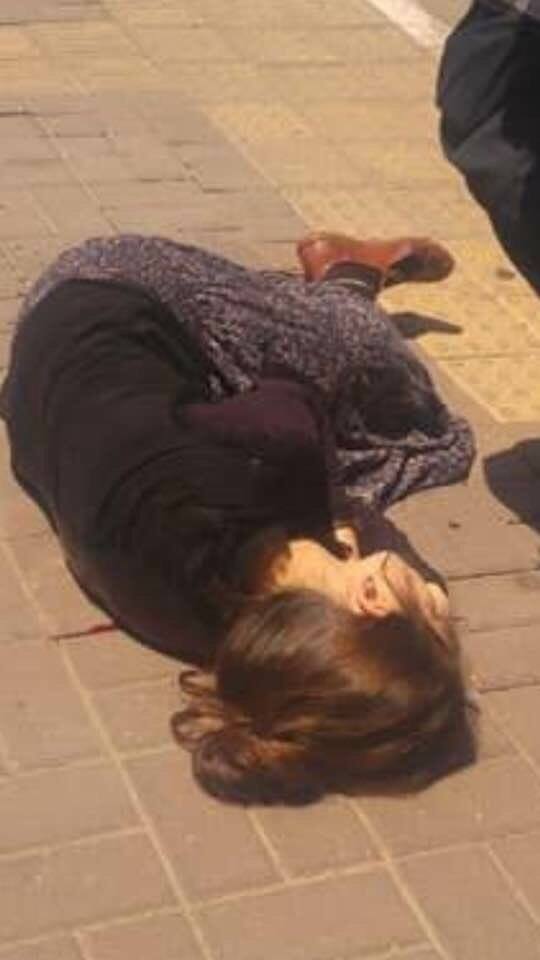