Top Posts
DECLARATION OF WAR: Hundreds of Rockets Fired On Tel Aviv...
Kristallnacht in Lod
Sky News anchor calls for President Biden’s resignation after disastrous...
Hamas Rockets Shot Near Jerusalem Empty Western Wall Plaza During...
Muslims Cause Massive Fire on Temple Mount yet Blame the...
The BBC got a major slap in the face for...
The most unexplainable event in the history of warfare
Night of Fear: Jews Attacked by Israeli Arabs Across Israel
Jew Survives Lynch Outside The Old City Walls
2 Israelis Killed From Hamas Rockets – One Just Now...
Must see sight: Largest Israeli flag covers the Western Wall...
The Epic Gaza Speech that Israeli PM Netanyahu Never Gave!
MSNBC is hiding the truth about the “Palestinian” eviction from...
Arabs attack Jewish homes next to the oldest Jewish cemetery...
Israeli Arab exposes the inside of a Hezbollah attack tunnel

Jewish Students on Campus Stand Up to Anti-Semites

Campuses across the United States are breeding grounds for anti-semites. But it is not an overt form of anti-semitism. It is a sneaky form of anti-Semitism. The cloak that anti-semites now use is called BDS.  More specifically, BDS resolutions.
Canary Mission is their to remove that cloak and make it crystal clear that BDS resolutions on campus incite anti-Semitism. Watch the resolution process at George Washington University.

Whenever Students for Justice in Palestine (SJP) or other anti-Israel activists initiate a Boycott, Divestment, Sanctions (BDS) campaign, anti-Semitism rises. At George Washington University (GWU), Washington, D.C., this is exactly what happened.

The Jewish students made it perfectly clear why they opposed the resolution.

One student said: “I would feel unsafe if this bill were to pass, as I know many others would as well.”

Another went further and claimed: “I am made to feel that my identity is taboo on this campus.”

The Anti-Semites decided that the key for this to move forward is a secret ballot.

Despite Jewish fears and statistics that show a clear connection between BDS resolutions and campus anti-Semites, the resolution passed.  In April, GWU students led by SJP passed their #DivestThisTime BDS resolution. They achieved this via secret ballot in the GWU SA, 18-6.

Proponents of the BDS resolution thought that by voting via secret ballot, they could hide their anti-Semitism. They believed that using a secret ballot would allow them to marginalize Jewish students and avoid accountability to their electorate.

SJP activists went to considerable lengths to conceal their identities, but they failed. 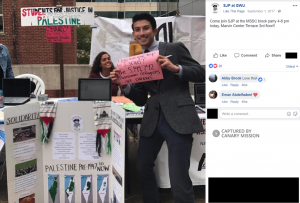 Students for Justice in Palestine in GWU

Here’s  a dandy quote from one SJP member.

Morgan Richmeier: “Just had my first fight with some Zionists in public. They called me antisemitic. They’re stupid and I’m going to physically fight them the next time I see them”

SJP members push for BDS resolutions.  It’s the most effective way to “normalize” anti-Israel activity for this generation.  It cloaks their anti-semitic efforts as human rights activities which sounds so humane.  This catches the unaware student.  It is smart, but also a lie.  BDS resolutions should be called out at all opportunities for what they truly are – anti-semitism for millennials.

The Many Lies of Omar Barghouti

About Canary Mission:Canary Mission is an anti-Semitism watchdog created to document the people and groups that are promoting hatred of the USA, Israel and Jews on college campuses in North America. Canary Mission investigates hatred across the entire political spectrum, including the far right, far left and anti-Israel activists.

For more about this campaign and links to the individual student’s profiles, visit the campaign page at www.canarymission.org/GWU

New York Times defends their racist writer and her tweets

Man intentionally backs his van into crowd of...

Spirit Airlines Kicks off Jewish Family and Then...

The Palestinian leadership has fooled the entire world